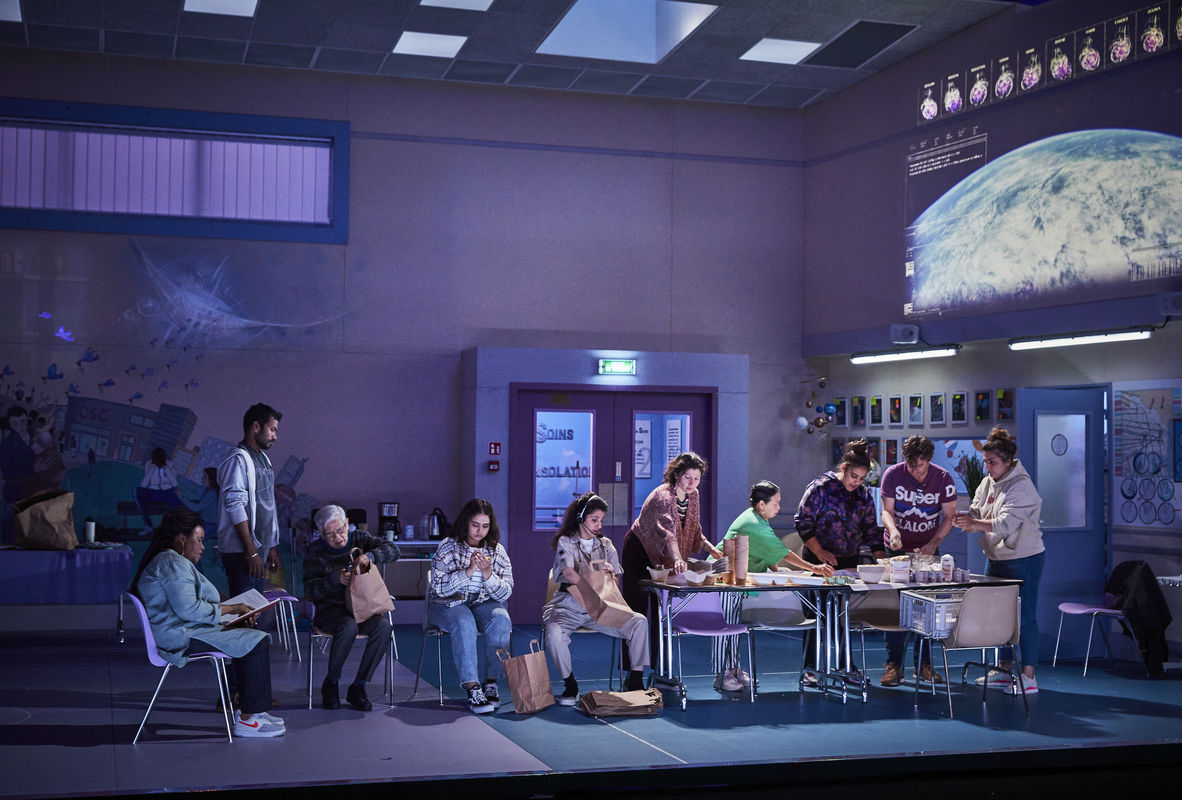 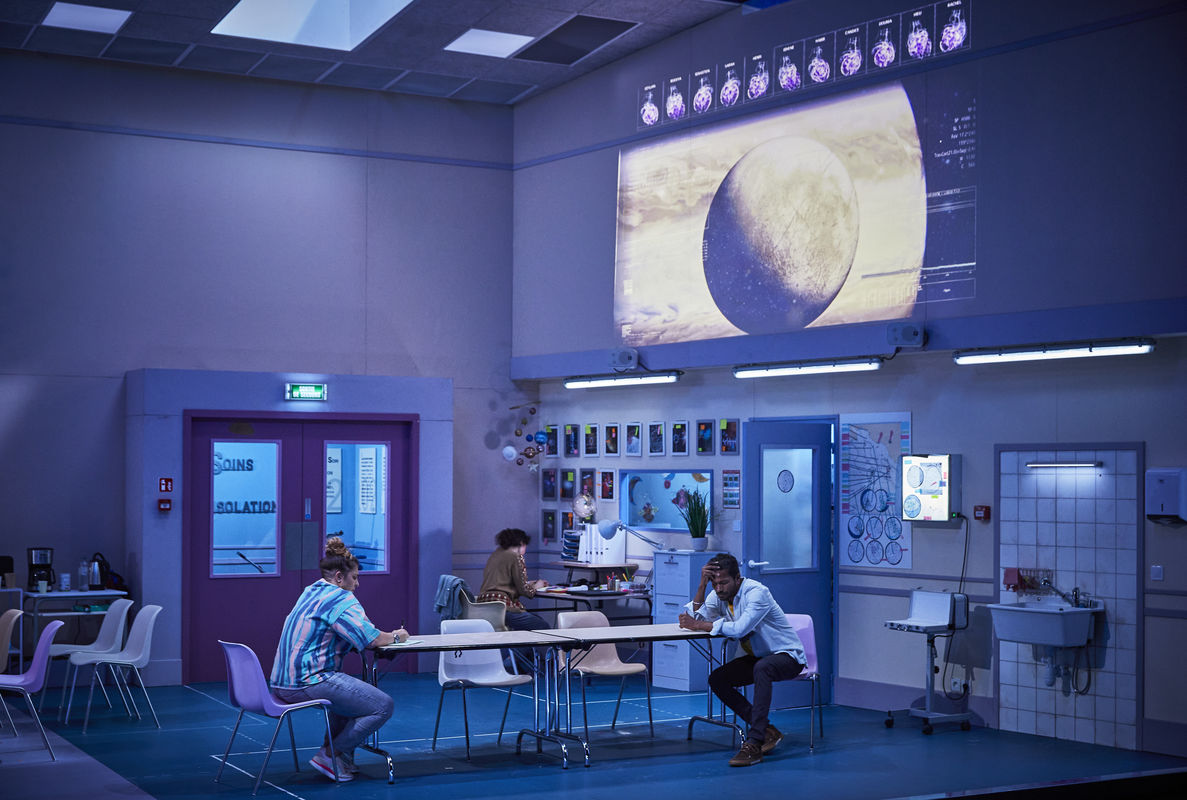 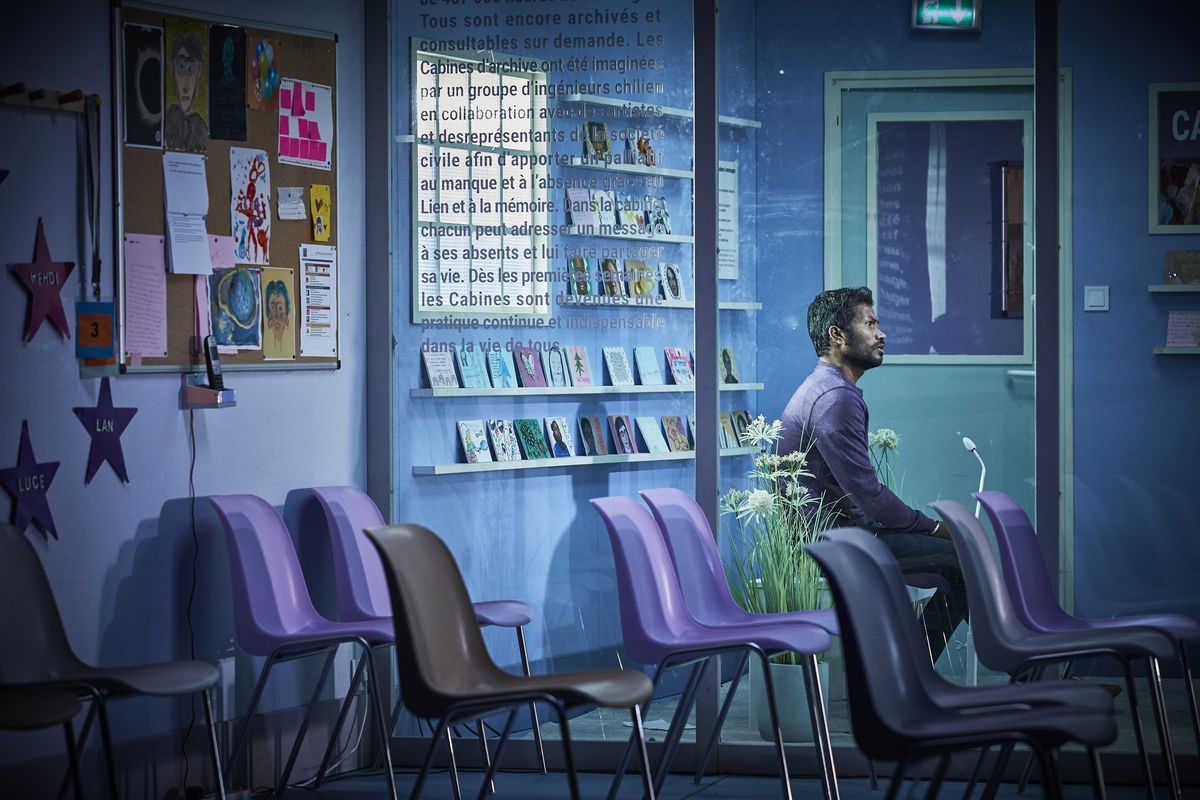 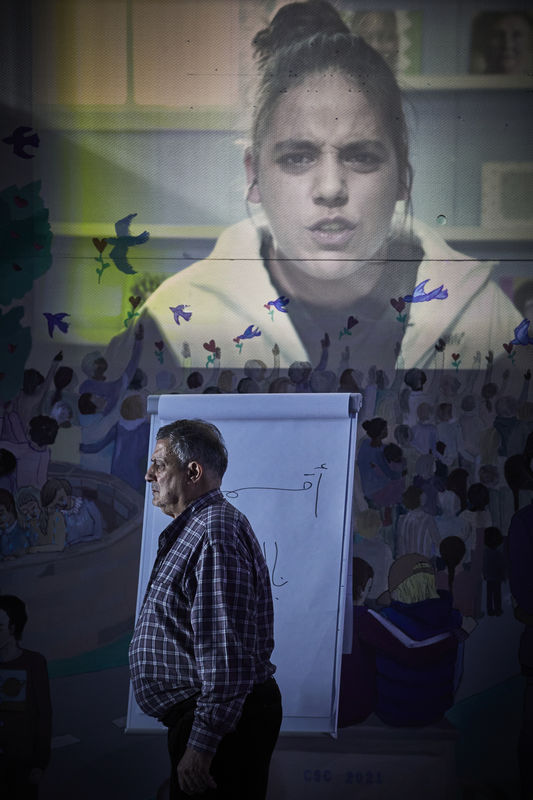 It’s a little hard for me to believe that Caroline Guiela Nguyen’s piece »SAIGON« came to the FIND Festival already four years ago. Its inventiveness is still fresh in my memory.

Reflecting on the pre-pandemic conversation I had with the French director––born of a Vietnamese family––I am reminded how »SAIGON« was both multifaceted and… very unusual. It was a piece about France’s reckoning with its overseas »possessions« and their descendants who are now French in France. A Vietnamese restaurant in a working-class neighbourhood of Paris––with its sounds, smells, and other sensual atmospheres––provided the cadre for the sharing of personal, and by association, political histories. The under-represented found space on the French stage to speak of identity. This space did not shy away from »sound and light, flashy colours, songs that are very kitschy«, to quote the director. The texture of the theatrical world, infused with warmth and even romance, and the emphasis on empathy, could not be farther from hardnosed idioms of realism. And yet, this lush theatre language found its sources in pressing contemporary topics, in the documentary genre.

For FIND 2022, Nguyen presents a new piece, »FRATERNITÉ«, Conte fantastique«, in whose title is already the imprint of this path uncommon for contemporary Franco-German theatre: the emphasis on the fantastical, a lack of timorousness in the face of the overtly emotional, even redemptive. Such qualities fly in the face of German publics who have read their Adorno.

The premise of »FRATERNITÉ« is both implausible and close to home: a four-minute eclipse strips the earth of half its inhabitants. The remainder turn to »Centres for Consolation and Care« to cope with mourning, loss. The feel-good interiors are designed to provoke ease of an institutional variety, an aesthetic researched by Nguyen, who visited care homes and community groups. One could imagine this scenario––half science fiction, half collective therapy––as a set-up for a cynical take-down of groupthink. But what Nguyen’s productions have a habit of doing is to pull us––with a careful nuance that invites a surrender of will––into the realms of compassion and courage, even hope.

Midway through the #FIND22 festival, I’ve noticed the press thematising the violent, cruel, aspects of the human experience. Both Tina Satter’s »Is This A Room« and Marco Layera’s »Oasis de la Impunidad«, in the first days of FIND, concerned themselves with how the violence of institutions played out in restricted spaces––a whistleblower’s house or a museum with draconian rules. If there’s a dramaturgical arch to the week’s order of programming, we are perhaps now moving into the more sunlit phase. On Saturday, the audience stepped out to take in a sweeping river view, of a temple destroyed but then rebuilt––in Lepage’s »The Seven Streams of the River Ota«. I suspect we will be offered other––perhaps more cosmic––view on Monday and Tuesday in »FRATERNITÉ«.

Lepage described his piece as an »exercise de mémoire«. Nguyen’s futuristic scenario also has a close-to-home historical resonance. While the piece was performed in Avignon in 2021, it was written before the pandemic and did not anticipate an audience facing collective loss.

The contemporary resonance is also in Nguyen’s continued dedication to putting »on-scene« the »less seen«. In this production, the actors come from origins as diverse as India, Morocco, or the rap scene of Marseilles––such as Ludivine Portalier. The latter musician told Le Monde, when interviewed in Avignon in 2021, how she was »angry; I was a fighter; didn’t conform to the image that society has for girls. I started writing very early, around the age of 15, to release all this rage, and that led me to rap. At the same time, I have a social conscience, I’ve educated myself«.

I find this quote useful as it hints at something under the surface of Nguyen’s productions. Despite the romantic, otherworldly aesthetic, the rage of social exclusion is not far under the skin. Perhaps it is precisely this rage, or disillusionment, in palimpsest that makes the surface indulgence––with all its celebration of colour and kitsch––not just palatable, but even appetizing, especially with its dollop of empathy.

I meet Caroline Guiela Nguyen shortly before the premiere of »FRATERNITÉ«, and she recounts how she came to the idea for the production through work she did in a prison in Arles, France, between 2014 and 2021.

»While improvising with the prisoners, I discovered how fiction was absolutely necessary for them: the fiction to be somewhere else, in a restaurant, a bakery, in Australia… I love fiction but I am also suspicious of it. It’s not natural to be put into a room where people show you stories that have been invented. But with these prisoners, I discovered how they needed to create, and through this I reconnected with my work.«

She discovered too other characters through her work in the prison: the wives and families that the prisoners left behind. Their lives consisted of waiting: »A life of waiting. I met a woman who had waited for 18 years, and put the phone on the table each night for dinner to have meals with her husband in jail… Those people who wait forever for the absent brought me to the subject of »FRATERNITÉ««.

I suggest to Nguyen that her form of theatre-making is unusual in the context of the European avant-garde, and she nods, telling me, »My path through theatre has been one of reconciliation. I was told in French theatre that characters don’t exist anymore, that emotions stop people from thinking, and that we cannot represent reality. My reaction was: there’s nothing left we can do. There’s only a confirmation of the destruction of theatre.«

»Only after a long time, it was through cinema that I came back to theatre. To come to a reconciliation with my tastes, to include in my aesthetic elements that are popular, such as popular music, songs that make you cry, or the interior decoration of social centres or Vietnamese restaurants. All those things that mix with so much of contemporary theatre like water and oil. My mission became to recognise the worlds that we don’t normally see on stage, to hear the accents and cultures of language that actors in French theatre schools––from Marseilles or Québec––have been told to lose. These accents need to be put on stage: it’s not just a detail. For me, it’s my work. Their suppression is very representative and violent. And I have discovered that there are people who love and are enthusiastic about our work, just as our detractors are suspicious of emotionality, with this prejudice that emotions will somehow prevent reflection. I want to rebuild bridges between others and myself––the capacity to be touched«.