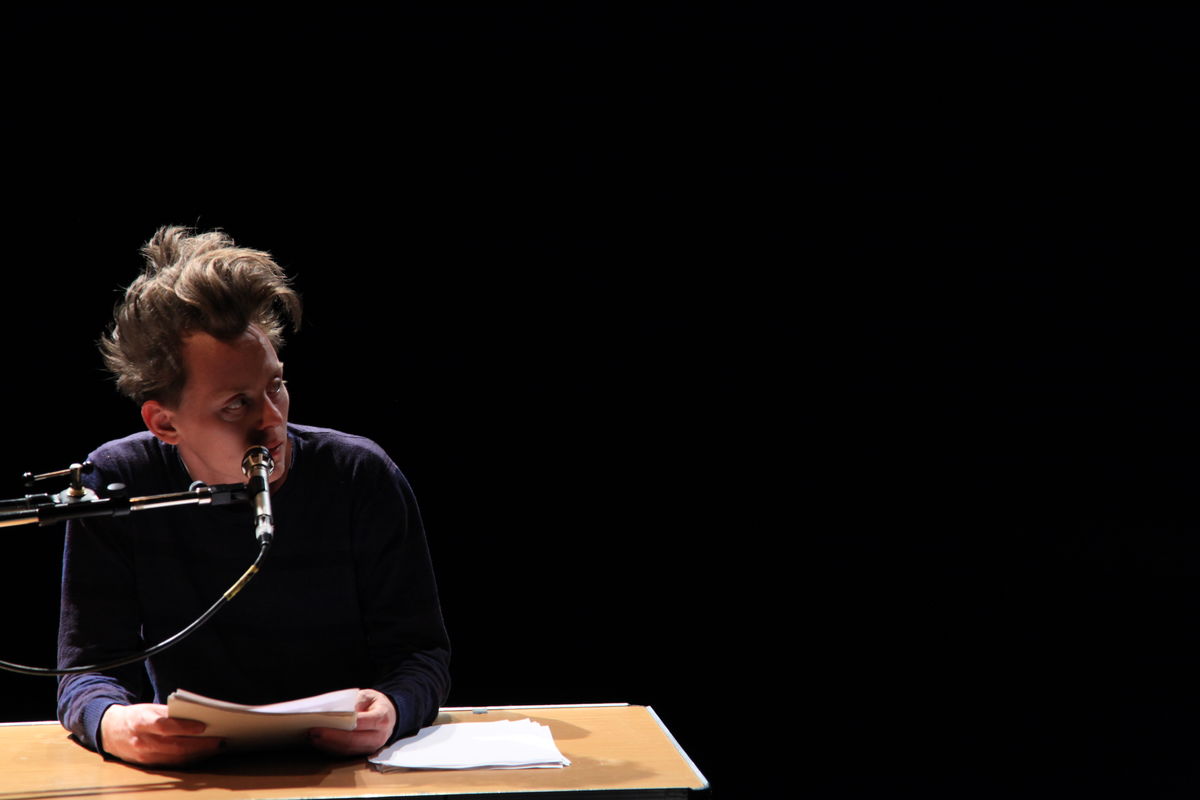 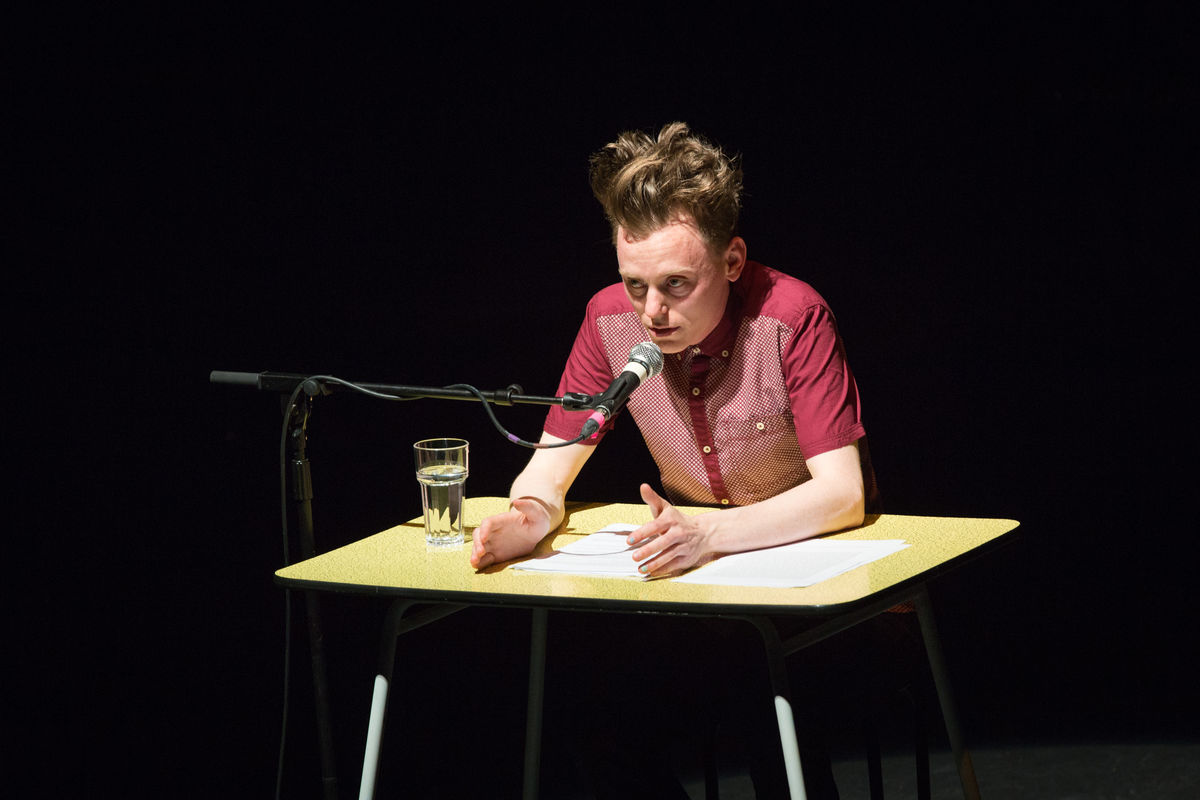 I’m meeting writer and performer, Christopher Brett Bailey, whose play, »This Is How We Die«, premieres Saturday at the Schaubühne’s FIND festival. He calls his show, which he developed and first premiered in Britain in 2014, a »motor-mouthed collage of spoken word and storytelling«. Its project description comes with »tasting notes«, words like: »violence«, »you and me against the world«, »death«, and »ejaculate«.

My fellow Canadian seemed like such a nice boy on the phone. What am I getting myself into?

I notice there’s also a wish list on the artist’s website: »Buy Chris a gift«. The Beavis & Butthead Doc Marten boots are too expensive, and the vintage Alice Cooper t-shirt too difficult to procure at short notice. I go for one of the cheapest items: candy. His preference is Haribo Tangfastics or Haribo Starmix. The latter I find after visiting four supermarkets and Spätis located around the Schaubühne.

Bailey appears before the theatre’s café, not long past noon, in his matted fur coat and heavy-framed glasses, beaming at my present: »A peace offering! We’re going to be close friends for the next fifteen minutes!«

Chris gets me a Rooibos tea and himself a coffee and a banana. He’s hungry (»My route through the breakfast buffet somehow left too much food on my plate«). But he also had trouble eating right before a rehearsal (»I get so nervous I want to kill myself«). I ask him if there’s anything about himself that he’d like to see end up in my preview. He considers, »Say I’m really tall and there’s a certain sex appeal that doesn’t come across in photographs«.

We get to talking:

Joseph: A lot of people compare you to a Beat poet. How do you feel about that?

Chris: My connection to the Beats is intentional. The idea was to do right by that influence.

Joseph: How did you come to them?

Chris: Through Stephen King, curiously. His books were around the house when I was a kid and I kept looking for another hit after them. This led me to »Naked Lunch« [by William S. Burroughs]. I was maybe 14-years old. I was interested that his words didn’t make sense in a linear way. I was dealing with abstract art, and reading it was a profound experience. There are only so many moments of profound sensation that you can have as a reader, or as an audience member. Those need to guide what you create, to move people who haven’t been moved that way before. I wanted to make something that both made sense and was nonsense at the same time. But there are similarities with Burroughs specifically and his shocking aesthetic. The Beats are inherent: I’ve read a lot of them. It’s as much in me as there is blues in the Rolling Stones. If you consume enough, it comes out of you.

Chris: Yeah, that’s how it worked for this piece. My idea was to sit down and empty my thoughts onto the page, without premeditation. I overproduced, without any judgement or opinions on the form, for two and a half years. Then I tried to categorise it and look for common themes – first alone, and later with a dramaturg. So, out of this mountain of nonsense text emerged a story.

Joseph: Is this your normal way of working?

Chris: Well, I wrote a play years ago in the traditional way, in a couple of sittings… act one, scene one… you know. It toured for some years but when I sat down to write a new play I faced writer’s block and a whole lot of guilt. It was then that I thought that maybe I should find a different process.

Joseph: You needed a big block to carve at––

Chris: Yes, you can sculpt with a small amount of material and build up something with it. But the other way was to have a great mass of material and chip away at it. It became »This Is How We Die«.

We get distracted from interviewing for the preview. We talk about places instead. About Berlin, that Chris knows well, for three or four days at a time at first. He thought it was »heaven on earth« and even tried living here for a couple of months. It didn’t work out. He soon discovered there was no spicy food. He likes spicy food.

Joseph: And how about London?

Chris: It’s too competitive and exhausting but I’ve become a Londoner whether I like it or not. I’ve been there half my life. It’s a place where the audience speaks the language I speak.

Joseph: There’s better Haribo in Germany. Even though I couldn’t find you the Tangfastics.

Chris: Tangfastics is sour. The Germans don’t like sour or spicy as much as in the UK or Canada.

Chris: I’m fueled by sugar. I like sensations, caffeine. Did you ever eat maple syrup on snow as a kid? Did you eat snow? Because you were thirsty, walking home from school? I think we Canadians are an oral people.

Joseph: Is that how you can deliver so many words so quickly in your performance? You’re known for your linguistic gymnastics. How do you prepare for that?

Chris: I haven’t done the show for a while: I’m going to be like a fat person on a tightrope. But I do exercises. Let me show you. In Corona-times, this won’t seem very hygienic…

Chris then hooks his pinky fingers into his cheeks and rotates them in a circular motion.

Joseph: What are you doing?

Chris: I’m stretching the lips, increasing capacity in my mouth. Then I manually stimulate my tongue with my fingers. I do this before performing for five or ten minutes. Then I do tongue twisters. I also like to read the script backwards. Or every other word. Or right to left. It’s better that way since I’ve already read it normally a hundred times.

Chris: Sometimes it even makes more sense! It serves a few functions: it lets me know if my pages are in order. It’s a warm-up to be at speed. It gets me into the world of the thing. It’s been a few years since we first premiered this piece, so it’s not always a comfortable jacket to put on. Anyway, my mouth feels huge after a performance.

Joseph: We were talking about places… I’m wary of national stereotypes but can we say there is anything Canadian about your sensibility? About your art?

Chris: I’m wary of that too. But I’ve met people in Britain who are not surprised that this aesthetic is coming from a Canadian. There’s something to being from an isolated corner of the world without much stimulation. Isolation’s not exactly where I’m from but the country is vast. I worked with a British director, Ken Campbell, before he died who said that the best improvisers in the world come from Eastern Canada, especially Newfoundland, because in a small community like that there’s no point in learning a play’s text. In a week everyone has seen it! You improvise so the audience will come back again and again. My piece is not improv, but I’m an improviser. It’s bottled improvisation. I jazz all over the pages until something coherent comes out.

Joseph: Canadians have the reputation for being so nice. But, truth be told, there’s a lot that’s not so nice in your show––

Chris: Canada is so safe, clean, sanitised, but something grows on its underbelly. The fiercest heavy metal comes from Scandinavia for a reason: they live in such a civilised environment, where they are unlikely to be exposed to much crime or danger. It’s similar in Canada for progressive rock. That maybe accounts for the grotesqueness. In this show, there’s a Canadian veneer of politeness, of decorum. The concern is about the right thing to do in any given situation. But the writing is also a subconscious spasm. Almost like an antidote next to the poison. After something awful happens in the piece, there’s something about social etiquette. There’s one more thing to add about Canada: think about what the country has done for humour. Jim Carrey is a nutjob. We think Mike Myers and Lorne Michaels are American, because of »Saturday Night Live«, but they’re Canadian.

Joseph: Maybe Canada is a little bit boring and we have time to kill––

Chris: My grandmother used to say that only boring people get bored. Maybe I’m just perpetually afraid of her judgement.

Joseph: I said before that Canadians have a reputation for being polite and nice. Do you think there is a big difference between your on- and off-stage persona?

Chris: What I do notice is that people are a little weird with me after a performance. Maybe because the set is so minimal – it’s just a desk, stack of papers and glass of water – and I come on with the same hairdo and clothes that I wear in normal life. I don’t signpost that I’m acting a character. In my scene in England, this is a very normal way to do theatre. We work a lot with autobiography, monologue, documentary theatre. Some performance is sometimes not even heightened. Rather, people tone themselves down for performance.

Joseph: We seem to be living in an autofiction moment. At the FIND festival, there was also work by Édouard Louis and Angélica Liddell, who both play with the ambiguity between character and author.

Chris: It’s because people have become suspicious of the author as god. How dare you invent something! Or tell someone’s story that’s »not your own«. We are living in non-fiction times. Anyhow, reality is more grotesque than whatever you can make up. Do you remember when documentaries used to be boring? Not anymore. Today, non-fiction will always outsell fiction.

Joseph: There’s a slippage between the on-stage you and on the off-stage you?

Chris: I’d say that my persona on stage is dictated by my writing: an outlet for anxiety, pain, negative emotion, violence, and things that make me uncomfortable. I am trying to scare myself as I write and I’m not satisfied unless I do that. I’m not sure why that is. Some people write in a more calculated way. Actually, I would love to write something for kids––

Joseph (laughing): I don’t know if you should be trusted with that task––

Chris: Yes, it’s slaughter and depravity––my imagination has always worked that way––but it’s also fun. I also think: you can’t know yourself. Maybe someone else would say that I’m really like the guy on stage. Maybe I would be if I didn’t have a healthy outlet for it. What is fiction for, if you can’t explore or won’t explore in real life?

Joseph: One last question. Off and on-stage, you’re also a musician. Tell me how that works into the piece –

Chris: Well, as I said, the text is sense and nonsense at the same time. Some parts you will get and parts you won’t––an experience I’ve never had before in the theatre. I love that music can also do that. I’m big into jazz. They play the head––the theme––and then someone goes nuts in a solo. There’s a focus, then a flurry that bombards you. One of my favourite rock bands is Sonic Youth: they also start with a bubble gum ditty that coalesces into noise. It’s like the Beatles and John Cage playing in the same band. You listen with two sets of ears, the literal and the non-literal marbling together. In the show, language is sound. And that is the structure.


THIS IS HOW WE DIE