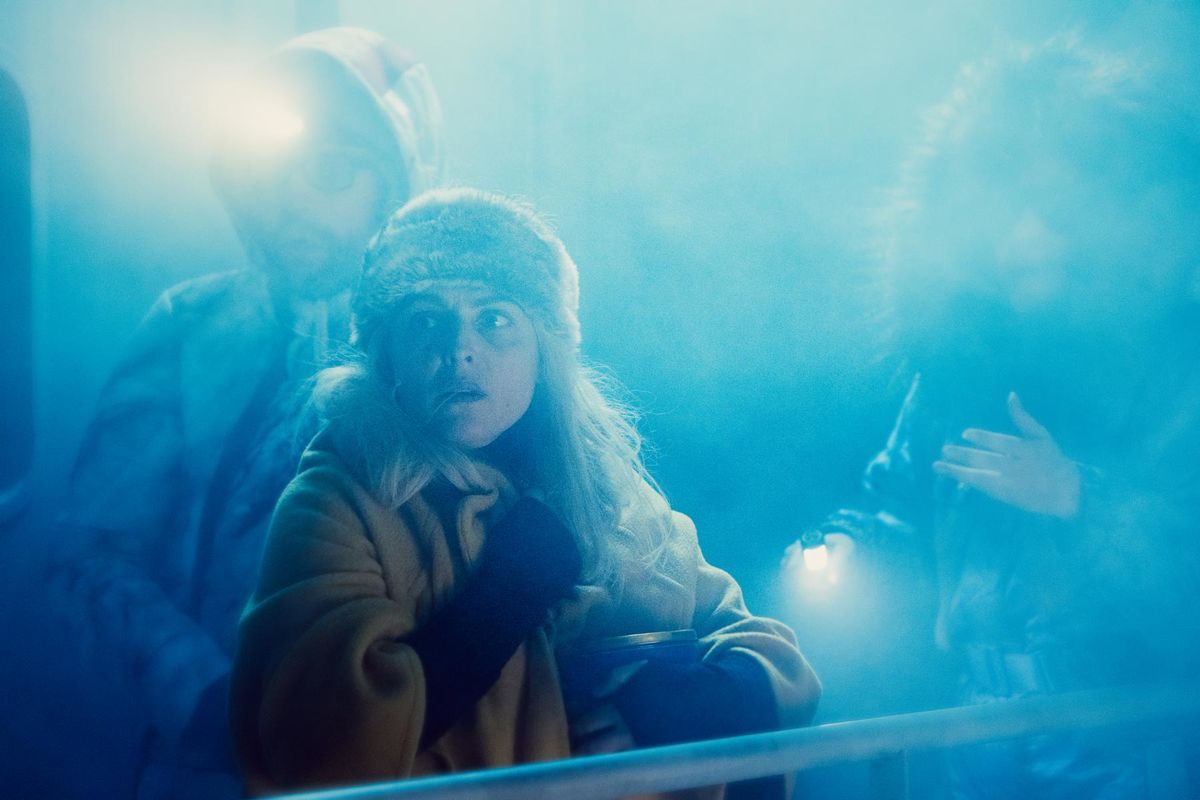 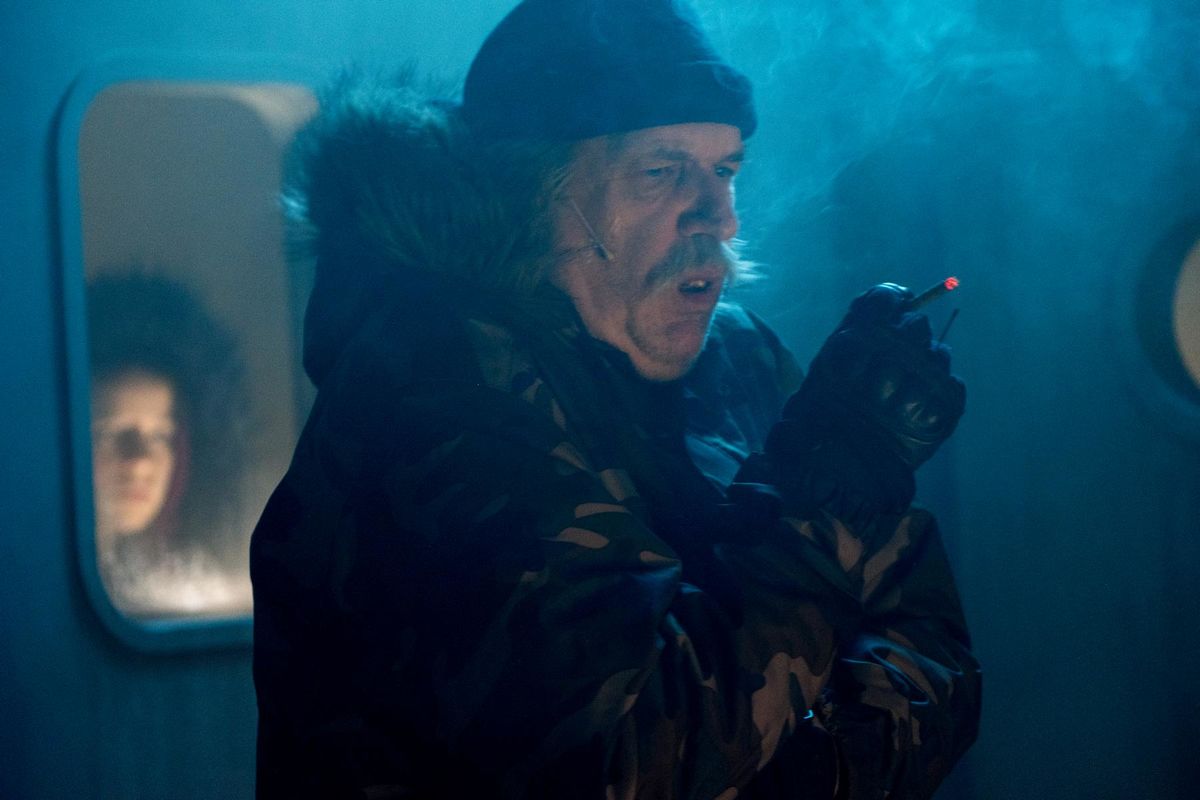 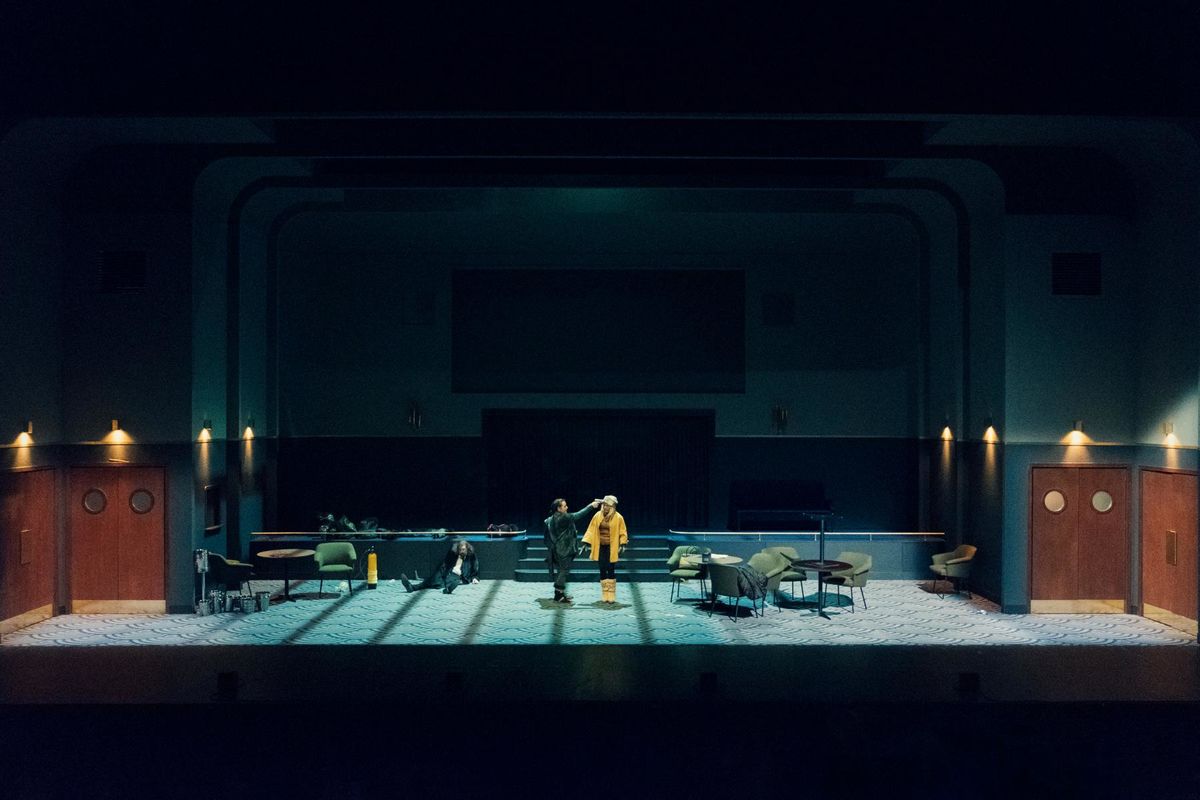 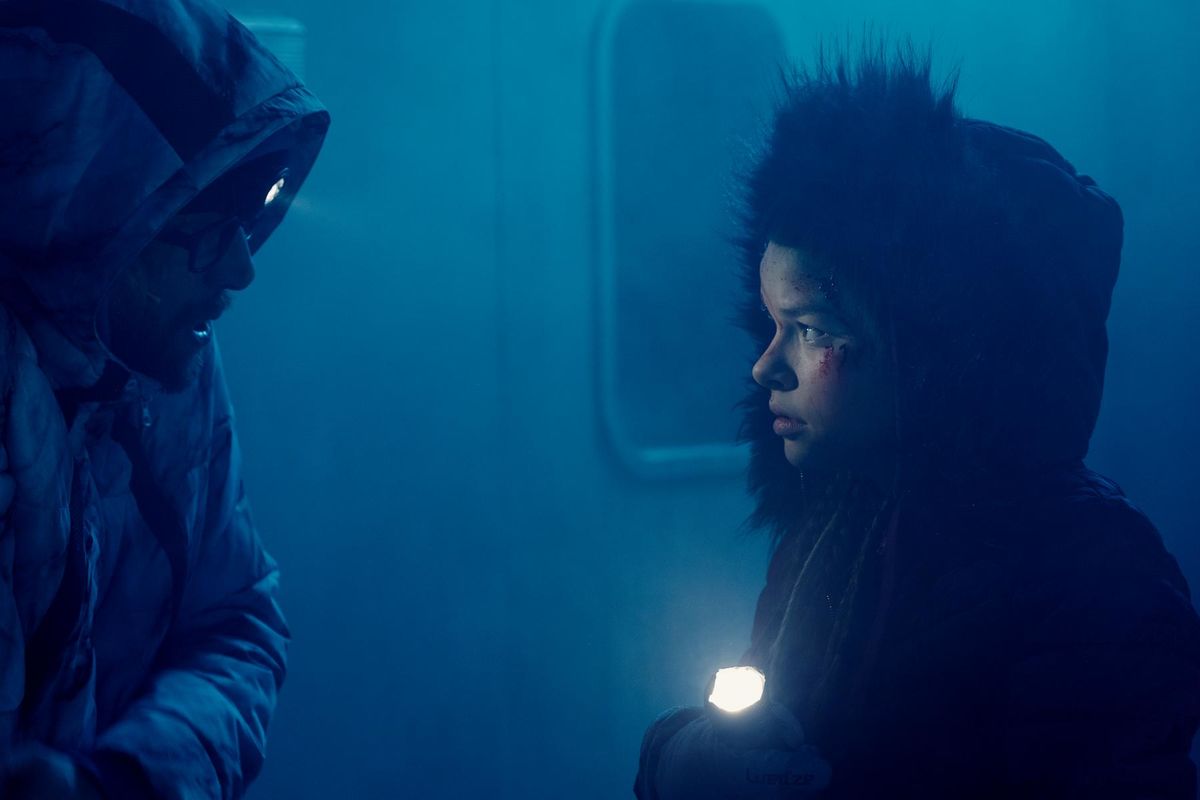 »ARCTIQUE« is a thriller set in the future, on a boat steering towards the promised land, a Greenland made rich by global warming. Anne-Cécile Vandalem’s treatment of her subject has an operatic scope. Her theatre is not reduced to tiny miniatures. It is augmented by bold and ambitious direction. The backdrop is the near-infinite space of the arctic. What’s at stake is humanity’s survival. The formal execution – of setting the drama on an enormous cruise ship – could hardly be more challenging. And, of course, there’s music.

»ARCTIQUE« was the darling of the Avignon festival last summer. It comes to the Schaubühne for FIND 2019, where Vandalem is well known. Her piece »Tristesses« appeared in Berlin in 2017, as the first instalment of her trilogy, which deals with the end of humanity. »ARCTIQUE« follows it both in theme and cinematic style. But while »Tristesses« takes place on a Danish island embattled by the far-right, »Arctique« takes us, by ocean liner, to a northern Danish possession in a time of ecological catastrophe.

I speak with the director, thinking her theatre is a rare mix. She is a political agent in our world, but her commentary is set in a surprisingly hyperrealistic landscape. Her work is plot-driven, and humorous, but is still strange enough to create Brechtian distancing. She is a director who specialises in creating atmospheres, but she does not ignore a good story.

As Vandalem explains, »For me, fiction is extremely important. It’s really the foundation of what I do: it’s my starting point, especially suspense fiction. Fiction becomes a mode of action that is both poetic and political. I have the impression that for a long time we have steered away from fictional narratives – at least when speaking about theatre culture in Belgium and France – and favoured instead forms that are more abstract. This return to fiction typifies my work, and creates a sense of distance from reality. We are so tied to reality, and for me, theatre, and poetry, are forms that allow us to see from a different point of view. It’s said that if you look at a star in the sky straight on, you have trouble seeing it. It’s only when you look a little bit to one side that you see it better. For me, this explains my approach to theatre«.

I reply, »Not only do you tell a story, but you are also very funny. Could you tell me more about the role of humour in your work?«

»Humour, like fiction, creates distance for me. Derision is a way to confront reality. Humour is not always seen as very noble, and when you treat serious subjects with humour, you can be accused of diminishing the subject’s gravity. But for me, when I stand back, we again understand better«, says Vandalem.

»When I hear the word ›distance‹ I cannot help think, of course, of Brecht. But when I think of Brecht, I’m not usually thinking of a sense of humour …«

Vandalem counters, »It’s funny you say that, because I had a professor at Conservatory, who was German, and who really made us work with Brecht and humour. And he helped us understand just how much humour can be found in the works of Brecht. That really shocked my other profs, who weren’t convinced that humour and a distancing effect could have much to do with one another«.

The fictional – and humorous – voyage on which Vandalem takes us is to the end of the earth. In fact, we go on several, often seemingly contradictory, journeys. We voyage on the physical plane, but also simultaneously on a psychological and existential one. The story that »Arctique« tells is documentary but also fictional. We cross the ocean physically on a cruise ship, the Arctic Serenity (I think of a phantom presence, like the Flying Dutchman, but one that turns out to look more like the Love Boat). In fact, the location is based on a real ocean liner, the Crystal Serenity, which in 2015 completed the first crossing (for a boat of its kind) of the fabled North-West passage.

The arctic route from the Atlantic to the Pacific was, until recent times, impassable because of perennial ice. Early explorations, such as the doomed Franklin Expedition, ended in a spectacular stories of deathly cold and cannibalism. But as global warming melts the ice sheet, so too has the North-West passage’s fable ceased to be fictional. Vandalem’s story takes place in the future, and its fable of the future will also likely become documentary. A journey to a Greenland may, due to global warming, become – for those living father South, in a world that has grown unbearably hot – one to an El Dorado.

Vandalem tells me, »The first time I went to Greenland in 2016, I thought I was ready to confront it. For me, it was just a fantasy, from childhood impressions, stories I read when I was little, of adventurers, the great expeditions in the North-West. I was caught up in a mythology and imagined that it was a place I could go to at a point in my life when I was left with nothing else. This is what I expected. I even had the romantic idea that if I went there, I would die there: in the great North, the empty spaces, in the cold, the void. But I wanted to talk to people there about this fantasy of mine, and also about death«.

»What happened when you got there?« I ask.

»Well, I was surprised by what I found. The only condition I had was to live with local people, so that I would not find myself just being a tourist. And, of course, I was surprised by my conversations. Especially when I began speaking to people about global warming. I understood that my idea of it as a catastrophe was a completely European viewpoint, and for them it is rather the symbol of the possibility of independence, the opportunity for them to exploit their resources. And so I felt very much put in my place. And this interested me, to learn to see things differently. The irony, of course, is that it is the multinationals from abroad – Total, Canadian and Danish businesses – that are most likely to exploit, as colonisers, these resources«.

Vandalem’s productions are ambitious and spectacular. She tells me that the biggest difficulty was creating the movement of a boat at sea, but the company found solutions using sound and oscillating lights. The other problem was to recreate the enormous scale of a cruise ship like the Arctic Serenity. But through video, the many cabins and hallways of an enormous ship could not only be suggested, but depicted.

»We use a great deal of montage and two principal cameras. This helps expand the sense of space. It gives an impression of, say, the polar night, vast distances, and what the immense sound of the ocean is like when you are trapped in a space that is only two metres squared«, she tells me, »The music also has a very particular function, which is dramaturgic. Everything centres on this music. Our Arctic Band is missing its lead singer, and so a little girl fills the place. And with its love songs, the band acts like a phantom that animates the boat«.

»And what of the polar bear? I saw in your trailer that you work with an enormous animal!«

Vandalem laughs, »Yes, I wanted a bear. He was necessary. The vengeance of nature. I did some research and found the creators of this bear in England, who had made one, in fact, for Greenpeace, and also for Radiohead. I contacted them and they made me the same model and it’s really excellent. It’s our bear«.

»I don’t want you to give too much away: but I have the suspicion that this existential voyage by boat, this maritime thriller, in a moment of ecological catastrophe, probably doesn’t end very well …« I suggest.

Vandalem replies, »Here, I think we need to talk about hope. For me, it’s there – in the story of the adolescent on the boat, in the depiction of youth, in the story of how nature penetrates the world of this boat. And if, effectively, it is not in the story, then we can put hope in the hands of the spectator. It’s there that we find the force of hope. There is always something possible. I believe too in art: that it brings us together, and that theatre can be an enormous political force. Especially today, when so much is virtual. In theatre, we are brought together physically and confronted with real people. And it’s one of the last places – because it is hard to leave a theatre – where we are persuaded to stay until the end of the story. Theatre demands a great deal of courage.«

As I write this essay, I am flying high above the vastness of the Canadian arctic. Soon we will reach Greenland. From the plane window, I imagine the frozen ships of the Franklin Expedition somewhere below, caught in the ice. I imagine the Arctic Serenity passing through the North-West passage that was once frozen, with a polar bear loose on-board. I imagine also the voice of a band playing on. It seems remarkable that so much »empty« space – territory that for so long was impassable (and feels like it still should be), this canvas for our imagination – might be our inhabitable future. I look forward to observing this topos more closely – not from a high window, but from the stage.

Interview conducted in French. All translations by Joseph Pearson.