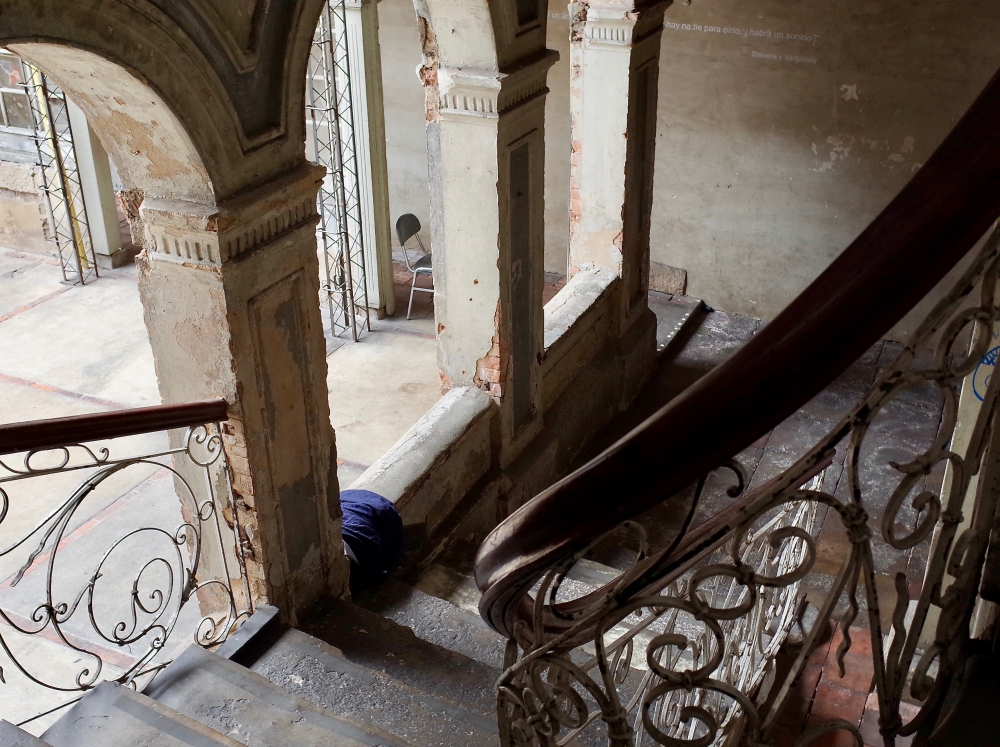 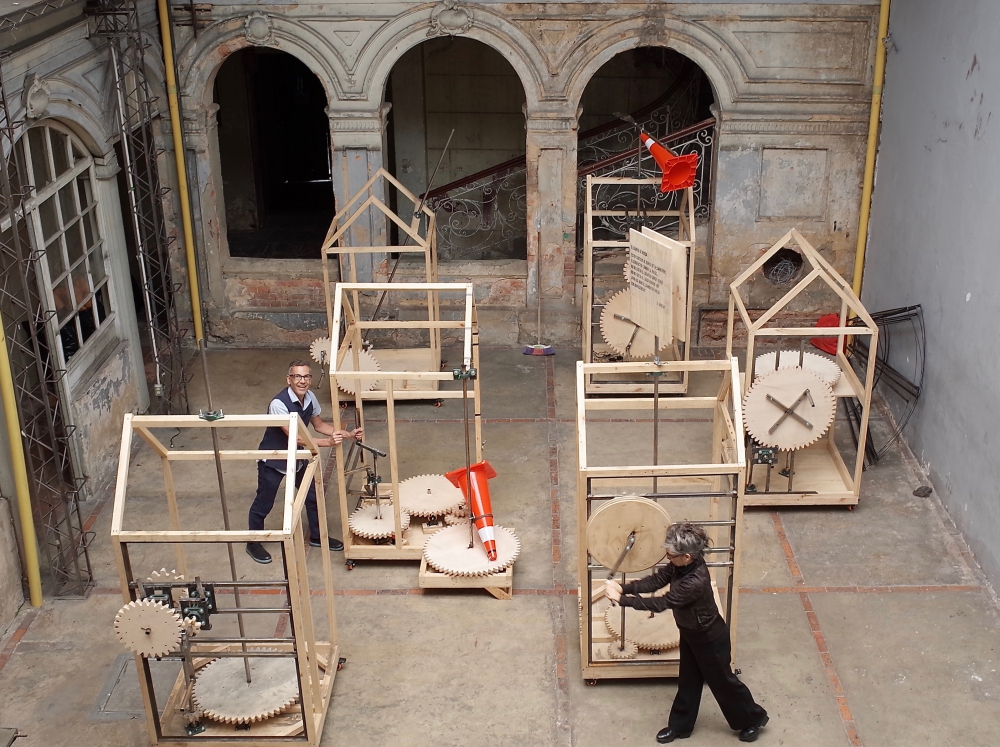 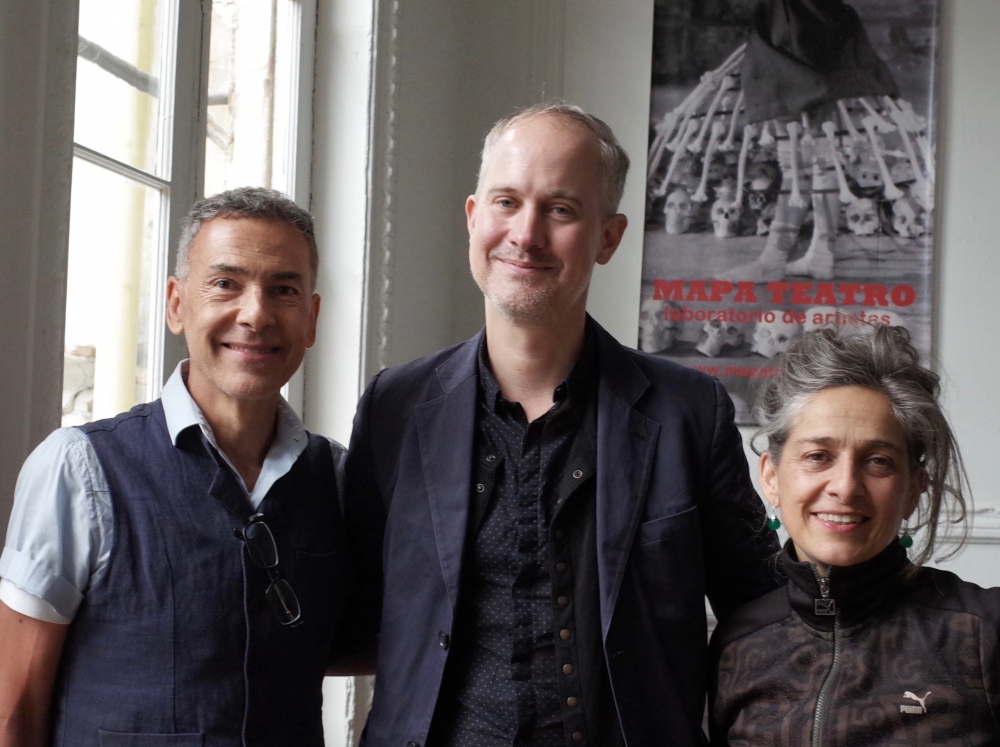 Theatre that Lies to Tell the Truth (with an appearance by Pablo Escobar): Mapa Teatro’s »Los Incontados«

Some theatres are located behind fences in genteel neighbourhoods, but Mapa is located in the thick of Bogota’s disorienting centre, in touch with the pressing problems of a country emerging from decades of drug violence after a peace deal with Colombia’s largest revolutionary force, the FARC.

As I write this preview, I am visiting Colombia. I am confronted by the bewildering high-altitude weather – torrential rain then bright sunshine – as my taxi zooms south into the centre. I am faced with the centre’s contrasting rush of tawdry vendors, panhandlers, and then men in pressed suits emerging from government meetings, as I exit my taxi. The architecture is just as varied: the Colombian National Museum, a former panopticon prison, is dwarfed by the fifty-story Torre Colpatria with its facade of concrete. All this is a change from the wealthy and sanitised northern neighbourhood, Chico, where I am staying, where the police position themselves in front of expensive hair salons and sushi restaurants. I step around bodies of the homeless stretched out on the sidewalk as I approach a massive portal, above which is written »Mapa Teatro«.

The door opens. Inside is a crumbling but palatial 19th-century hotel converted into an arts space by Mapa in 2000, originally for a site-specific performance of »Richard III«. Up the winding stairwell, windows look down to an interior courtyard adorned with arcades. There, the members of Mapa are cranking enormous wooden machines they have constructed, that look like apparatus out of a notebook of Leonardo da Vinci.

Heidi Abderhalden, who co-founded Mapa with her brother Rolf, describes with a smile the mysterious machines. They are Brechtian, even capable of creating a distancing effect! I imagine it depends on how long you crank them.

The Abderhaldens are a delightful combination of intellectual, curious and relaxed. They utterly charm me. Upstairs, we sit in an airy room with enormous windows and hardwood floors where they describe their background and the new production they will bring to the FIND festival at the Schaubühne in Berlin this April.

They grew up in Colombia in a Swiss family. »We were educated in French, and marked by a vision and culture that was very European«, Heidi tells me, »After school, we both left to Paris to study at the Ecole Jacques Lecoq«.

In Paris’s eighties theatre milieu, they met director Simon McBurney and William Kentridge, who were classmates. Mapa was created in Paris in 1984. »It was a remarkable place of group creation, very interdisciplinary«, they tell me. It was also rich with influences. Rolf visited Samuel Beckett in September 1989, a few months before his death (Mapa’s production, »De Mortibus: requiem for Samuel Beckett« was later produced in 1990). In his last months, Beckett was no longer normally receiving visitors. He was, however, interested in Colombian politics. Rolf went to the seniors’ home in the 13th arrondissement, to the last room Beckett occupied, where he sat down next to the ageing playwright who took his hand and said, »Things aren’t going very well in Colombia, are they?«

No, they were not. That is one reason why the Abderhaldens went back to their country. As Heidi tells me, »We realised that something different was happening in Colombia, that made us ask the question: what kind of production does this place demand? We were touched by the country’s politics. We arrived at the moment of the biggest increase in narco-traffic, and the wars between the cartels and the state, and we decided immediately we needed to stay here«.

Heidi continues, »It was a moment that we needed to decide where we would work. We were a little divided. We were autonomous before creating Mapa, me specialising in the Feldenkrais method [of somatic education] and Rolf with his graduate work in visual arts. Nonetheless, we knew we wanted to work together. And we were tired of living in Europe after 12 years«.

Rolf continues, »We realised we were connected in Colombia, with friends, artists, the family, the country. We felt immediately incorporated, and received a reception that was fantastic«.

They brought with them a form of theatre that, Rolf tells me, simply didn’t exist before in Colombia.

»We work as a laboratory for research rather than as a traditional theatre«, Heidi explains, »At first, we worked in many different locations – roaming Bogota like nomads for 15 years – they were site specific pieces, in ruins, in neighbourhoods that were disaffected, heterotopic, marginal, and certainly not areas that were consecrated to theatre«.

Rolf expands, »To give you some examples, we directed a production of Heiner Müller's ›Horacio‹ [1993] in La Picota central penitentiary in Bogota. The prison inmates were our actors – many young people who were recruited by narco-traffic, and by guerilla movements. Another production, ›Witness to the Ruins‹ [2001-5] was long-term, with five years spent in an impoverished neighbourhood, El Cartucho, that was to be demolished. It was a very particular site – of drug and arms sales. This project has guided, since the 2000s, our relation to the city of Bogota. These were foundational experiences in a tradition that was not extensive here: the laboratory, of live arts, with an ethical and artistic position, which came from our artistic practice«.

Heidi goes on to explain that before they arrive in Berlin (March 2017), they have invited thinkers, mostly from Latin America, to take part in a platform called »Experimenta Sur«, to reflect on questions regarding the consumption of memory and forgetting.

»We live in a country that is trying to revindicate memory after 50 years of conflict. We want to problematise memory and its connection to forgetting. Both are necessary. What are the important questions? We invite artists who work on this, but also thinkers, who reflect on the politics of memory, especially on the question of museums, memory processes, and the archive. The Goethe Institute has been instrumental in sponsoring twenty Latin American thinkers and artists to come to us for two weeks. It’s wonderful, this alliance with Germany, because we don’t have that kind of financial support in Colombia«.

Mapa will bring this international background, laboratory practice, engagement, and particular Colombian experience to the piece, »Los Incontados«, which is invited to the FIND festival. The piece is a triptych about violence in Colombia over the last 52 years. »It is that many years because it is also our story. It’s the age I am now«, Heidi tells me. The title comes from a little-known poem by Paul Celan, »Erhört«, in which he refers to what is »untold« or »countless«. »Incontado« in Spanish gains this double meaning (and it is suggested too by the German »ungezählt«).

To focalise this complicated and expansive narrative of violence, Mapa has used one trope, which that of the celebration, be it Catholic feasts or local fêtes.

»We are interested in celebrations, the fiesta of the living, and of violence in the context of the massacre – we look at this threshold between celebration and death. The celebration’s stage becomes a device to examine attack, death, kidnapping, military assault and armed confrontation. It also provides dramatic possibilities that can be exploited, because it is traversed by pure theatricality. ›La Fiesta‹ is also a theatre of operation, to use the military term, incorporating techniques such as ritualisation, mimesis, camouflage, transvestism, simulation, pure play, or masked play«.

The word »triptych« has been chosen rather than »trilogy« because of the iconic importance of religious figurations. And what are the three parts? Mapa presents two twenty-minute extracts from previous productions (each originally an hour long) for the first two panels of the triptych. The third part has not yet been produced in its entirety. Only this twenty-minute extract of the third panel currently exists. Indeed, the final section gives room for possibility; it opens up the piece to future work.

»Could you tell us more about one of the panels, just to give us a taste?» I ask.

And Heidi and Rolf begin to tell me about the second part of the triptych, »Discurso de un hombre decente (Discourse of a decent man)» which is about the 80-year old Danilo Jiménez, a musician who regularly performed for Pablo Escobar, Medellin’s infamous drug lord, or Narco, whose cocaine trade transfigured Colombia political life and plunged his country into unparalleled violence. Mapa exploits what they call the »eccentric theatricality« of his political ambitions and the violence of drug trafficking.

»Pablo Escobar wrote a speech on his presidential ambitions, where he spoke about his world vision in relation to the economy, which divided the world into the powerful and the exploited, between consumers and producers, and he wanted to invert that power relation using drug-trafficking. Escobar said: I will legalise drugs, cocaine, and I will export, and we will live by these legal exports, which grow like flowers naturally in our country. It was a new sensibility«, Rolf tells me.

»All the words are his, but the discussion we present is fictitious, completely false. Nonetheless, it is also completely faithful to Pablo Escobar’s declarations. And we decided to treat these declarations from the perspective of a witness, and we chose a musician we found, Danilo Jiménez, who worked for Escobar at his extravagant parties, at his celebrations in the 1980s with his musical group La Banda Marco Fidel Suárez. In the end, he suffered in a violent attack in a public space in Medellin, with his whole orchestra playing«.

»We see in the triptych a presence of this musician. For us it was necessary that we return to this question: what we can say, what we cannot say, what should be exposed, not exposed? What of the presence of the witness, who took part in the scene as if taking part in a fiction? What was his agreement to take part in this fiction, without losing his status as a witness? How can he prevent himself from becoming a character, not lose his quality as witness?«

I start to understand better how their laboratory mixes genres, and I ask, »What you do then is not documentary theatre – but rather docufiction?«

»It is definitely not documentary theatre. There is a lot of fiction in our documentaries, but we prefer the term ethnofiction«.

Here they refer to the term coined by Jean Rouch (1917-2004), whose films were ethnographical in character, based in small communities where residents played their own roles, although the plots were fictitious. One can imagine how this concept can then be exported to experimental theatre. And perhaps, some narratives that are fictitious – but based on historical documents – are better able to transmit the feeling of a past reality than those which is strictly documentary.

The Abderhaldens conclude, one speaking with the other, »Ethnofiction is the permanent friction between what is real and fiction. It is also game: it involves a community that constructs their collective capacity for game. It’s to say that documentary theatre was too restrictive. With Escobar, we don’t create a real transcription; instead, we create a document that is traversed by the issues of fiction.«