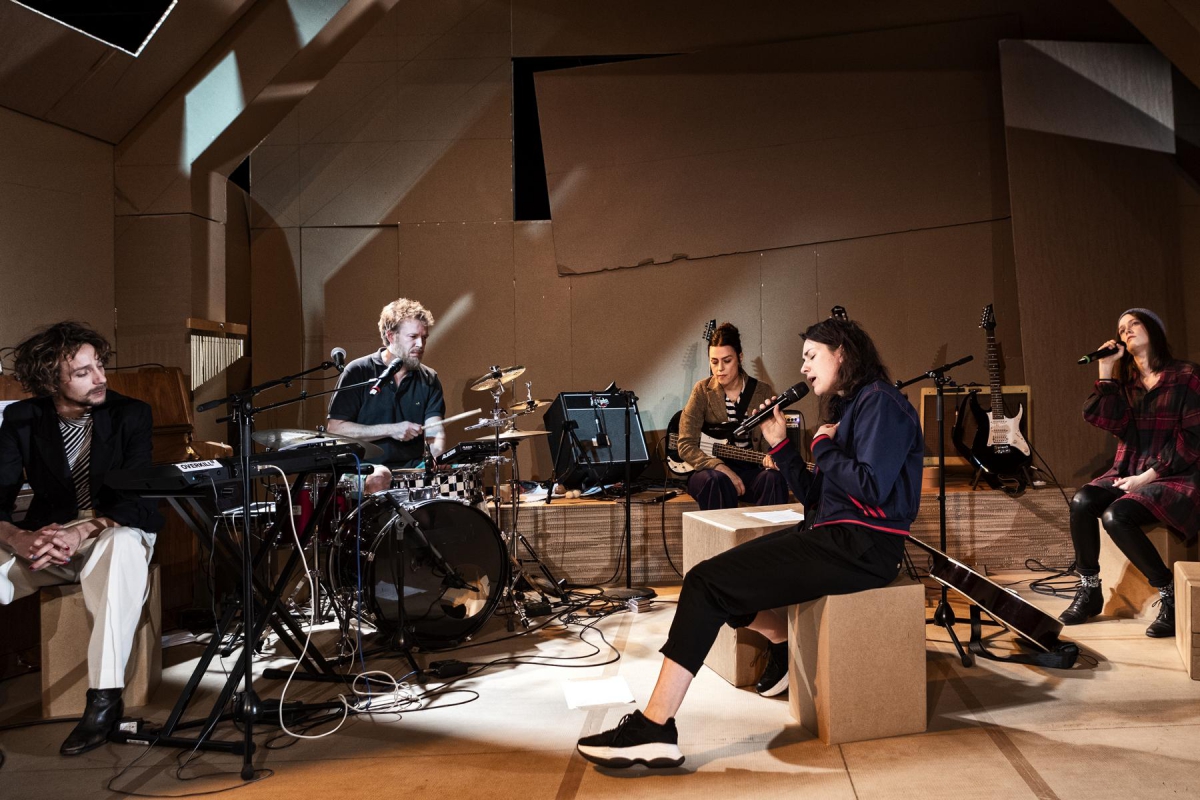 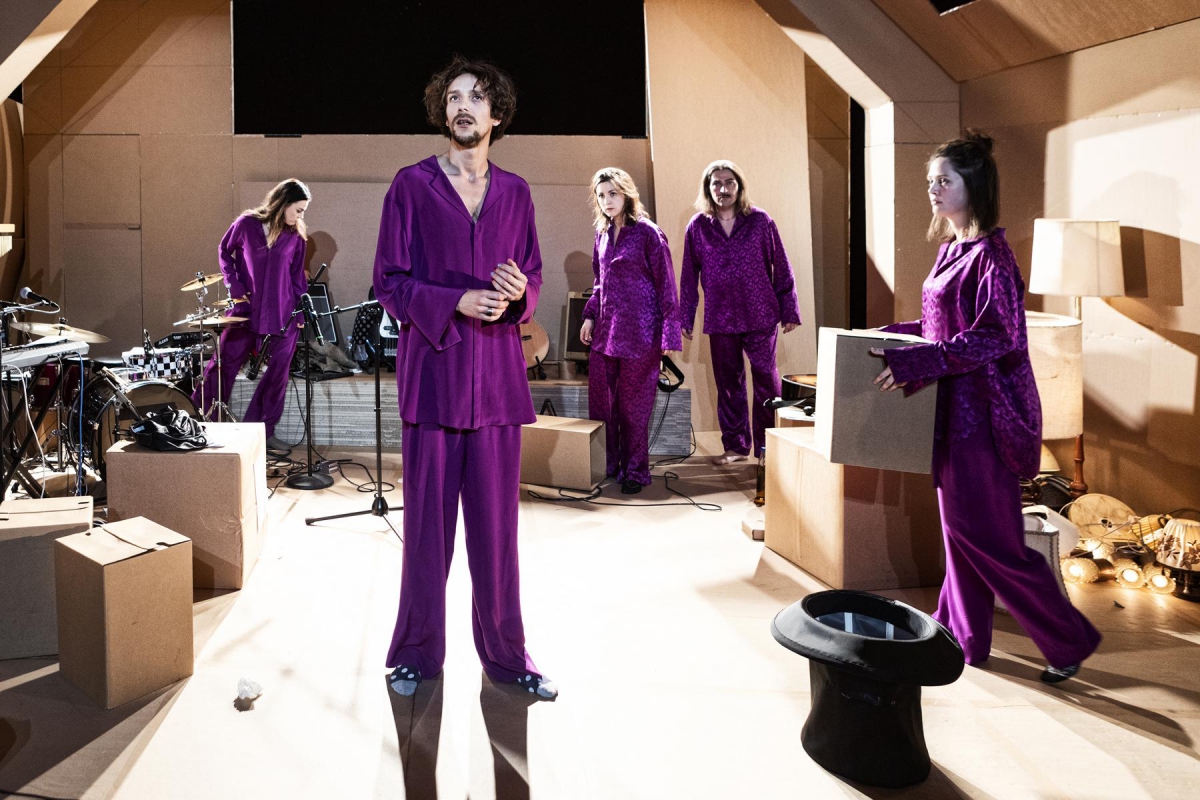 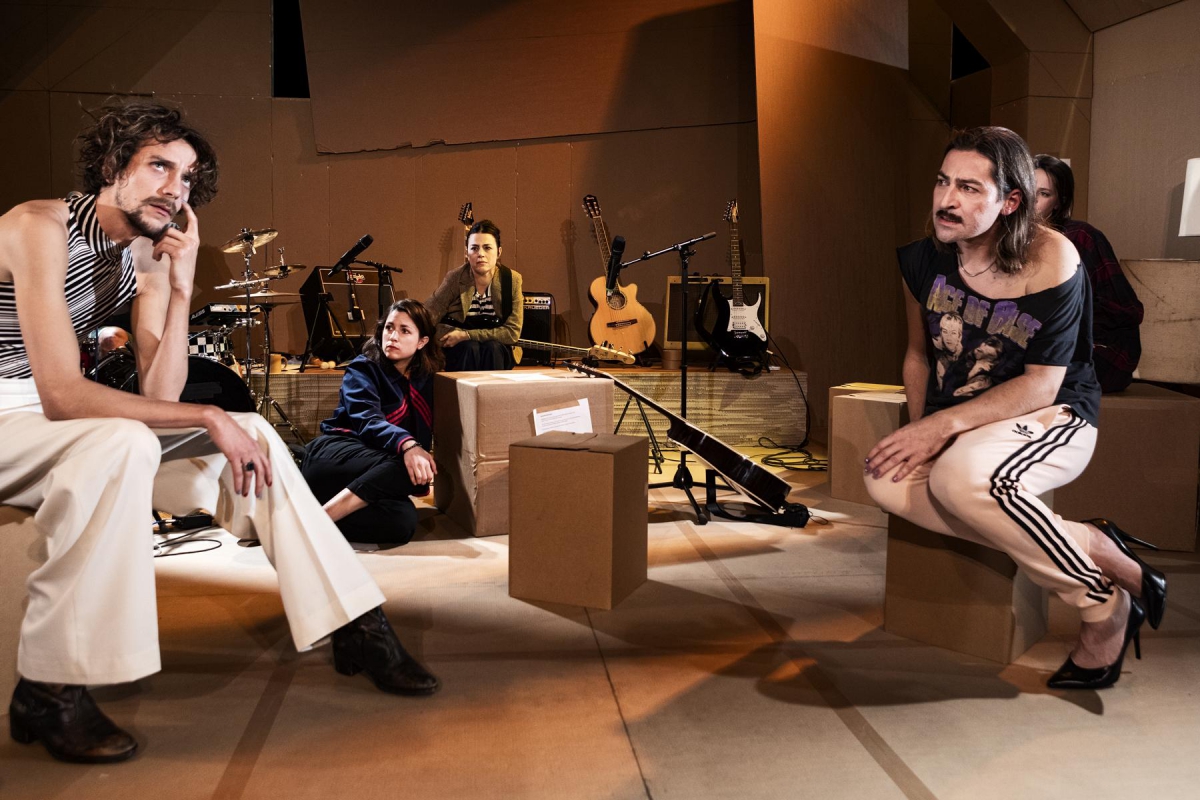 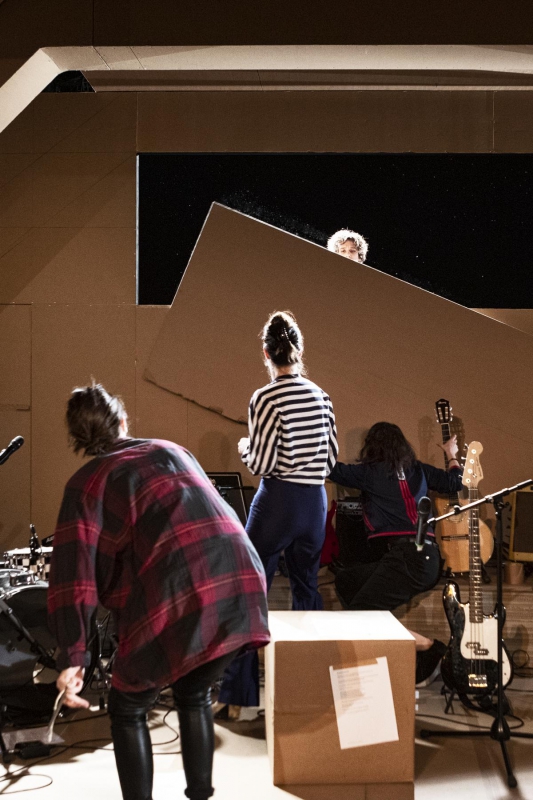 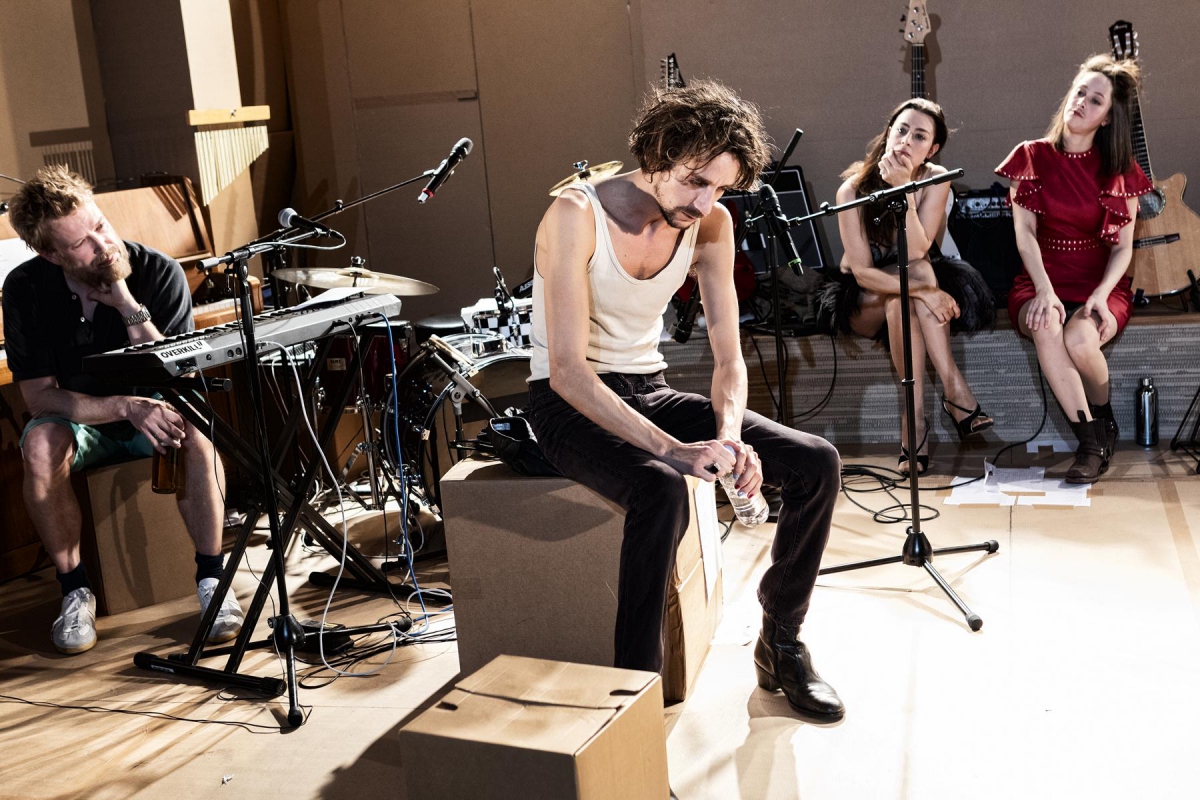 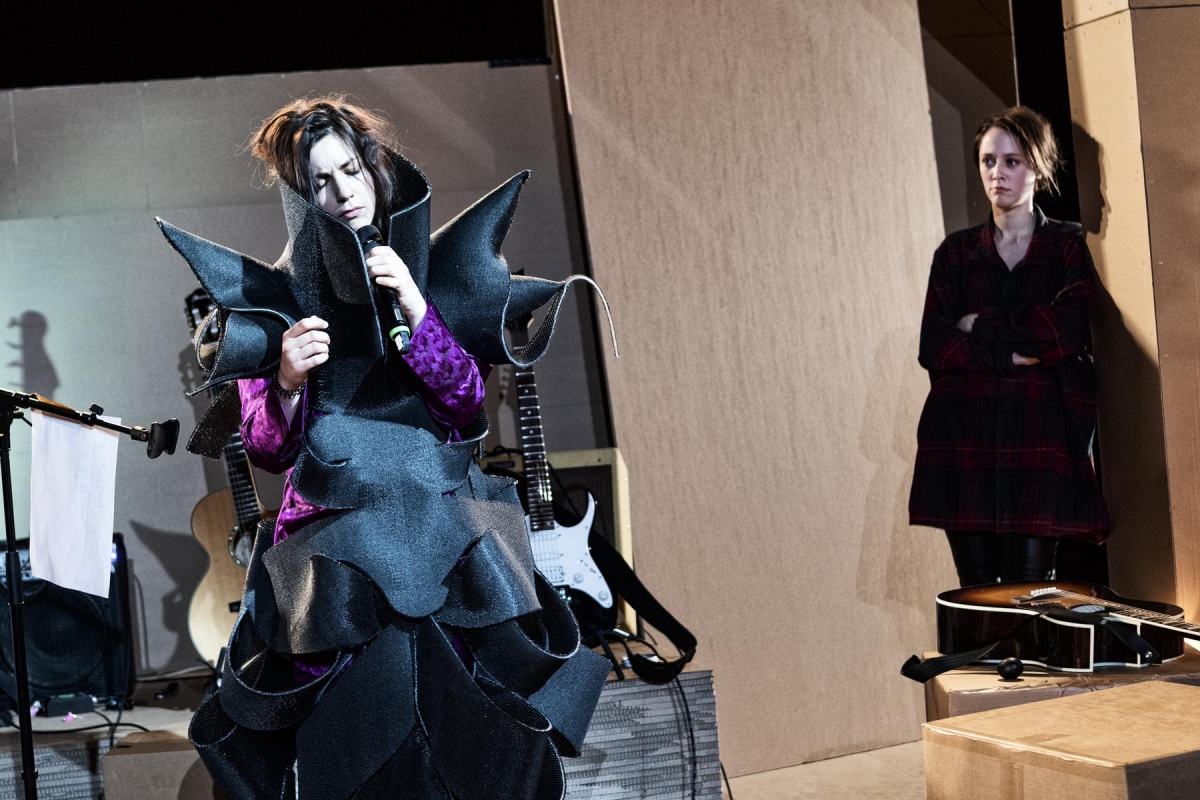 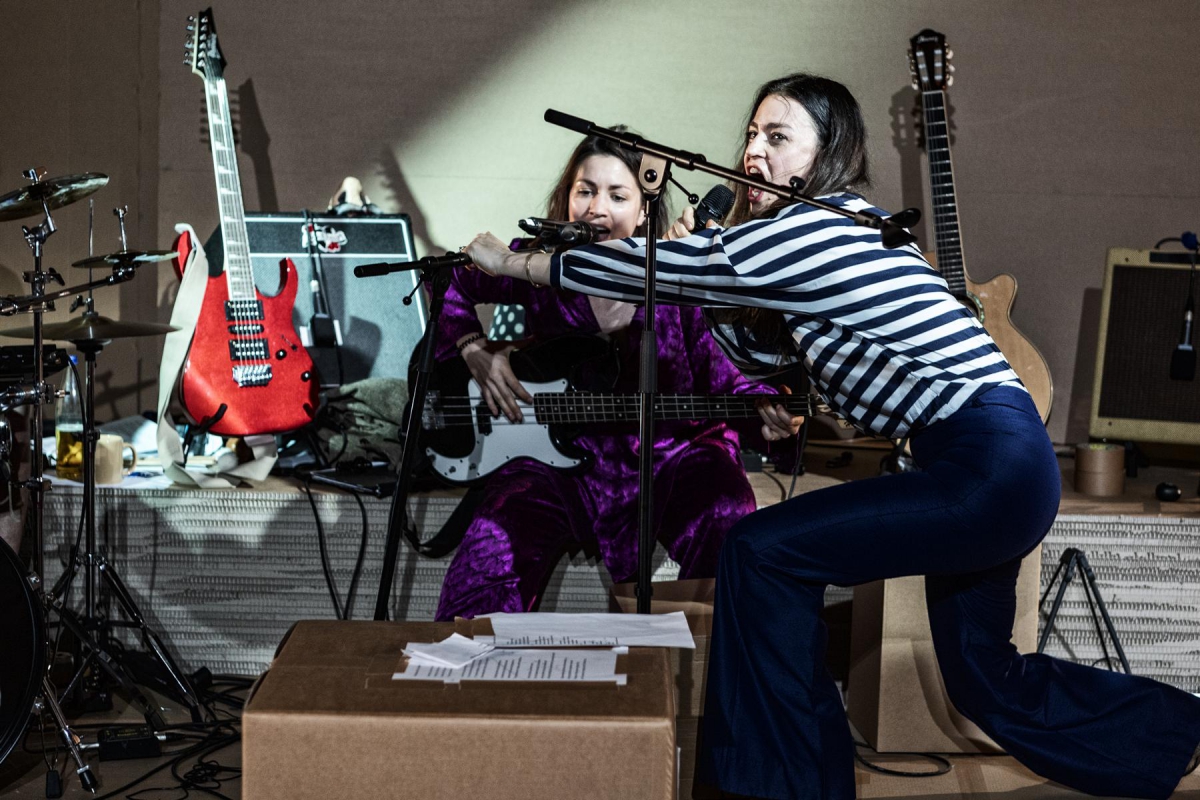 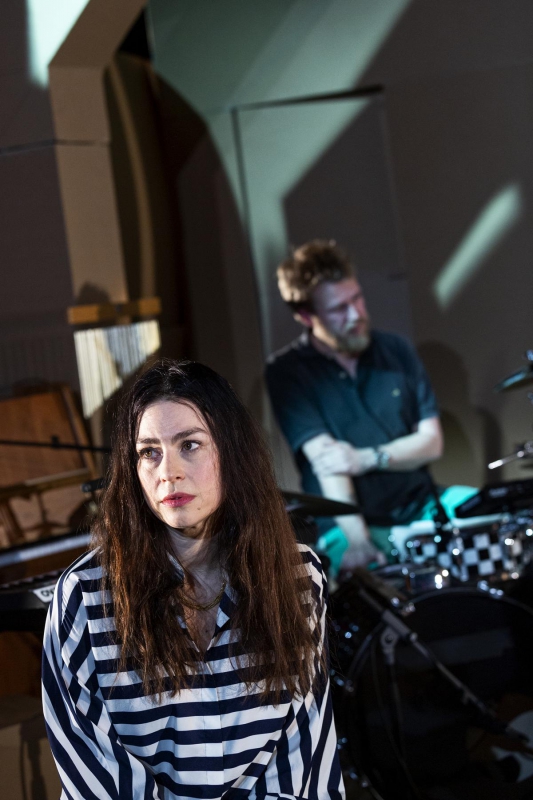 Actor Eva Meckbach stands on stage tuning a guitar. This action – adjusting the string to an accepted pitch – seems to carry a second meaning in a production about gender performance and the performance of music. Can you tune gender?

»HE? SHE? ME! FREE.« is what director Patrick Wengenroth calls a »gender jam«. The sheltered set in the Schaubühne Studio makes you feel like you are in a garage, attic, or basement, jamming with your friends. Singing and playing together creates an intimate space for improvisation and drawing people together. It’s precisely the right atmosphere for a truth or dare session, for sharing secrets, for exploring gender trouble, and experimenting with gender fluidity. It’s a »safer space« to ask hard questions: what does it mean to be a woman, under the rules of the patriarchy? To be trans? How do you identify and respond to power categories? Why do these questions make so many people (and governments) nervous? Are you nervous?

The cast is practicing their songs, all about »a man’s world« – about freedom and paranoia. Wengenroth tells me, »I’m a Spotify junky; I listen to a lot of music, and music is in all my plays. Maybe even half of this evening will consist of songs and music. I started building a playlist a year ago when we knew we’d do this production. It grew to 210 songs. I presented several to actors. But they came back to me with more songs that they thought were fitting. In the end, it is a mix. Half come from them and half from me. I didn’t insist on my playlist in the end, because when they can relate to what they are doing on stage, it always gets better«.

This sharing tells you a little bit about how Wengenroth does theatre. He stretches back in his chair in his Adidas track pants, a hoody printed with a black panther, his long hair pulled into a ponytail, his nails painted lavender and pink, and tells me: »I always think that the product you make on stage – the process of how you create the play – has to correspond to the working atmosphere. I don’t call myself a director, but rather a »Realisator«. That’s important, because we are doing it together. As I’m also on stage as a performer, I am not the director who sits in front, saying you have to do this or do that«.

Co-performing with the other actors means that Wengenroth can continue to remain in the production, and see how the show develops over time.

»Often being a director is sad: you have your premiere and then you’re gone. The production goes into repertory and it’s often no longer your product. That’s one of the major reasons I always try to be on stage. Not to exert control, but to be part of it. Our previous show about the contemporary wave of feminism, »thisisitgirl«, has been running for nearly five years now, and it’s given me the opportunity constantly to reframe and adapt the discussion, and react to developments such as #metoo, so the performance remains contemporary and not something that feels dated«.

On stage, Ruth Rosenfeld has just finished crooning her musical number, partly re-enacting a viral video-clip concerning housework (We’re not giving away anything yet, come to a show to find out!). And Patrick turns to the others and says,  »We better do some texts now, so Joseph doesn’t think it’s all music«.

In front of the practice stage is a work table. Texts as various as Fritz Riemann’s »The Basic Forms of Fear« (»Grundformen der Angst«), Yukio Mishima’s »Confessions of a Mask«, Virgine Despentes’s »King Kong Theory«, and Judith Butler’s, »Gender Trouble« are stacked on the table. It’s an enormous field: from Marxism, biology, economics, biopolitics, post-Fordism, Accelerationism, Xenofeminism, to Cyberfeminism…

I ask Wengenroth,  »How do you work with the texts; how do you take on such an enormous body of literature?«

»We do it by starting with the personal issues. We write them down and then combine them with the literature and theoretical texts. The funny thing is the more truthfully you talk about your personal issues on stage, the more fictional they seem to the audience! We then have a dozen songs to respond to the same number of texts. Some of the texts are spoken by all the actors – we have three biological women and three biological men – but we also have solo performances, even a Wittgenstein number if you can believe it«.

»And which of these texts – that respond to the personal – have drawn you more than others?«

»A couple of texts have been very important to this production. Judith Butler, of course. But also Paul B. Preciado’s »Testo-Junkie«, about the biopolitics of testosterone use in a female to male transsexual, where he’s gender-hacking himself. Or »The Argonauts«, by Maggie Nelson. The actors have all read this text. Exploring the author’s romance with the artist Harry Dodge – who is fluidly gendered – the book turns the concepts of love and marriage, motherhood, pregnancy, and making a family and gender, on their heads.«

»I know some audience members will probably be asking themselves what a cis-gendered man is doing co-creating a performance about gender fluidity«, I suggest.

Wengenroth tells me,  »Yes, I’m a heterosexual, cis-gendered guy. But what we try to do here is to look at the material with scientific interest and an emotionally open perspective. I don’t really see why this should be bad. But let’s go deeper: theatre is nothing else but pretending to be something that you are not, isn’t it? And when I think about the LGBTQIA+ community, I am most drawn to the Q. I have an affinity for this queer community«.

»Because I’m also often in the situation where I feel outside mainstream expectations for what might seem like trivial reasons: because of the non-traditional roles I take on in my family life, because I like appearing on stage as a woman, or because I like to wear makeup in my daily life. Or maybe something else is going on. Let me give you an example. Sometimes after a show, I go home still wearing my make-up and wake up with it when I take my kids to school. The other parents are sometimes confused if I have glitter under my eyes. They look at me differently. And they ask me: why are you wearing make-up? And if I like, I can tell them: it’s for a theatre performance«.