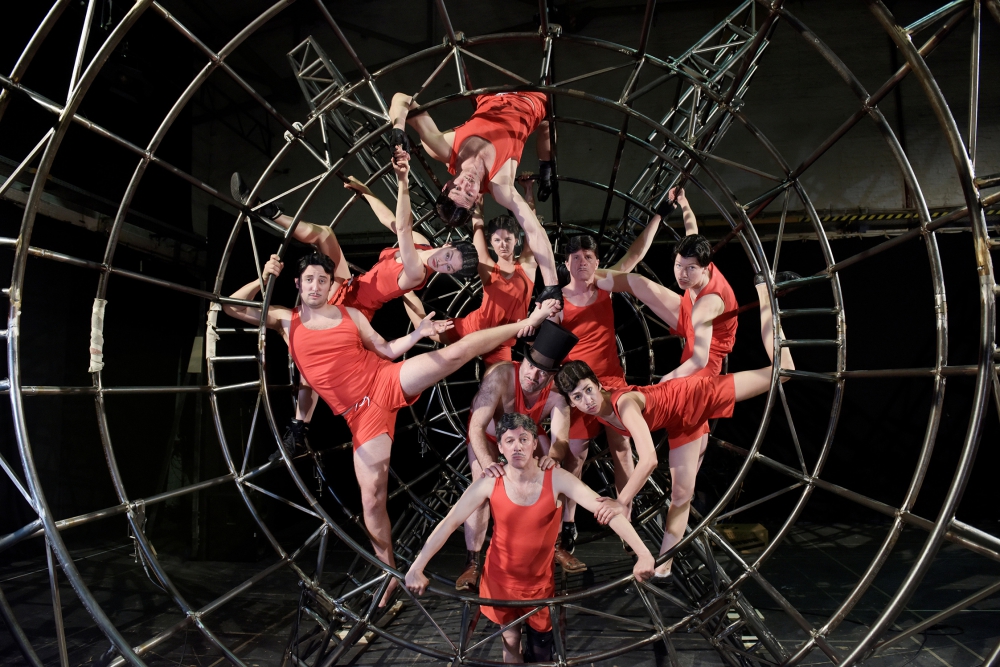 One is almost obligated to begin a preview about »Zeppelin«, Director Herbert's Fritsch's first production at the Schaubühne, by touching on the controversy that has engaged the press and Berlin cultural scene for more than two years now: the fate of the Volksbühne. Herbert Fritsch worked for almost two decades as an actor and later as a director at the institution, until it came under new leadership this autumn (resulting in the departure of almost every artistic collaborator who had once worked in the space).

When we sit down in the Schaubühne's café, Fritsch tells me wistfully: »What I find truly sad is how much hate came out in the Volksbühne debate, and the way in which the theatre was ended, which was unacceptable and undemocratic. You have now a crack running through the whole cultural scene in Berlin«.

Perhaps one inadvertent, and positive, outcome is that, with the dispersal of so many people from the Volksbühne, the Schaubühne has benefited from incoming talent. On leaving, Fritsch brought with him an international troop of actors who have joined the Schaubühne's ensemble: »the Fritsch People«, as I heard them called shorthand upstairs in the administrative offices. They include, for example, the singer Ruth Rosenfeld whose life between theatre and music and itinerant biography seem as diverse as the cosmopolitan Ödön von Horvath's – she was born in Los Angeles, raised in New York and Israel, and now a Berliner. Or there's Florian Anderer, who has appeared already in a dozen Fritsch productions, now acrobatically leaping above the stage on the suspended skeleton of a great blimp. He recounts, »I was bidding on a vintage Led Zeppelin CD on eBay, then the phone rang offering me the Schaubühne job. By the time I came back to my computer, all excited, I'd lost the CD, but I'd won a different kind of Zeppelin«.

When I walk into the theatre for rehearsals, I found the »Fritsch People«, with other ensemble actors, singing Offenbach's Barcarolle »Belle nuit« as a warm up. I wish I could properly convey the lightness their singing gave to the hall, and the camaraderie I felt from the group; they were having fun, working together in a space that gives them autonomy. I felt precisely why so many people are drawn to the theatre in the first place: the magic of making beautiful things together.

Earlier, in our discussion in the café, I suggested to Herbert Fritsch – bespectacled, thick-haired, charming, gregarious – that his »Zeppelin«, based on the various works of Austro-Hungarian playwright Ödön von Horváth (1901-1938), is a »collage«. Fritsch, however, corrects me, saying he would rather speak of a »cocktail«.

»What kind of cocktail?« I ask, »Fruity with an umbrella?«

»No, fun but at the same time bitter. A cocktail that is only sweet is... terrible!«

»No, not a Piña Colada. Cocktails are interesting when they have something explosive in them«.

»You mean, lots of alcohol?«

»Or did someone slip drugs into it?«

»In a very minimal concentration. It can cause euphoria«.

»Maybe it's a Dark and Stormy«, I suggest, thinking of the drink's oscillation of light and shadow, »With the dark rum floating on top«.

»Yes, a Dark and Stormy. But it has a strawberry on top«.

The cocktail metaphor isn't just for fun. It is an efficient way to describe his technique. Fritsch elucidates: »What I do is shake up the playwright's texts so the linearity is broken. What you notice, in the quality of Horváth's texts, is that they are very powerful. And you can take the lines from twenty pieces and shake them up, and they can still have meaning. Perhaps not exactly 'meaning', but something that the mind can comprehend. There is sense, but there is also displacement, a kind of literary cubism. And that stimulates me; it's like a cocktail«.

Ödön von Horváth was himself a mixed-up concoction: a Hungarian-speaking Habsburg product, born in Croatia, educated all over the Empire and Germany, who ended in flight from the Nazis, first to Vienna in 1933, then to Paris after the 1938 Anschluss. (He died that year in a storm, when a tree branch fell on him on the Champs-Élysées). Not only was his biography eclectic, but he also had a distanced relationship to the German language, since he was not a native speaker and learned it only in his teens. We agree that it would be interesting to read a study about authors who choose to write in foreign languages. »Like Joseph Conrad«, says Fritsch. Or Beckett.

This distance makes Horváth's relationship to language more abstract. He paid great attention to German's sonorous elements as opposed to just its denotation. And, when seeing the rehearsal of »Zeppelin«, I saw how Fritsch takes the opportunity to play creatively with the musicality of the author's words.

(I might add here – as we have elections later in the week – that there is also a political dimension to Horváth's distance from the German language. His political moment, that of the 20s and 30s, is one of anti-fascism (a dominant theme in his plays »Youth Without God« or »Tales of the Vienna Woods«). Arguably, people who can make an abstraction of language, as the tissue of »culture«, are less likely to be susceptible to Nazism, because they have worked beyond culture and language as something essential or natural, or superior. The political is not Fritsch's goal, but it's an accidental I appreciate as Germans go to the polls).

Distance is an essential component of »Zeppelin«, and Fritsch describes his technique as one of »filters«. He tells me, »What interests me is a filter as interpretation. These filters can be many things: body postures, ways of enunciation, the physical distance between characters. A displacement of a situation on stage thus provokes something from the text«.

Spatial filters aid an exploration that sets what Fritsch does apart from, say, both Brecht and Beckett. »Brecht had a message, a goal«, he tells me, »And I don't. I discuss the subject, to provoke, but perhaps we can do nothing with it. Perhaps it has no meaning«.

We are not meant to arrive at a prescribed end-point. Rather, we are left are open-ended, »at play«. Is the work, then, more Beckettian in this sense? In its attention to word play, perhaps. But this too is a false ending: because the lightness of Fritsch floats up into the air as opposed to being sucked down like Beckett's »birth astride a grave«. Fritsch's light is not painful, but rather luminous.

What »Zeppelin« shares with, say, Beckett, is that it is funny. Much of the comedy is physical, and Fritsch's sense of humour provides yet another layer of distance from the material. He tells me, »In Horváth: every sentence has strength, and seriousness, but also a great humour, a real lightness. It's an everyday problem to believe that when a piece is not serious, then it is not profound. This is biggest misunderstanding in German theatre as a whole. It has to do with the German feeling of guilt, which has a great importance in the culture, and which has not yet dissipated. I think when one tries to find lightness, one is in a better position to process the terrible things that happened in this country«.

»Is this guilt what accounts for the humourlessness that one so often finds in post-war German art production?« I ask, speaking admittedly very broadly.

He replies, »Germans should stop feeling petrified before the subject of their guilt, and  be able to use comedy and lighter modes to address it. Horváth is sombre, but it is a sombreness that is also trying to float up. Like the Zeppelin, or blimp, which is heavy on the ground, but then swells«.

And, indeed, the blimp is the central metaphor of this theatre piece. It's hard to miss. It hangs over the stage like the iron skeleton of an enormous whale. A huge, spellbinding, cage, it is an image from Horváth's play, »Kasimir und Karoline«, which is set in a Munich Octoberfest, after the 1929 Stock Market Crash. The characters stare up at the swaying form suspended above the festive crowd. In Fritsch's piece, the actors hang from the blimp's bars, inside and out. There are moments of fright when they try to lift it, and it threatens to fall on them. But then they pass, almost magically, unscathed through the grid. What is their relationship to this great structure? Is the Zeppelin threatening? Is it light or heavy? The stage lights give varying illusions of its weight. The shape defies what is interior and exterior. It is a perfect object for projection. Meanwhile, it sways, and oscillates, dreamlike.