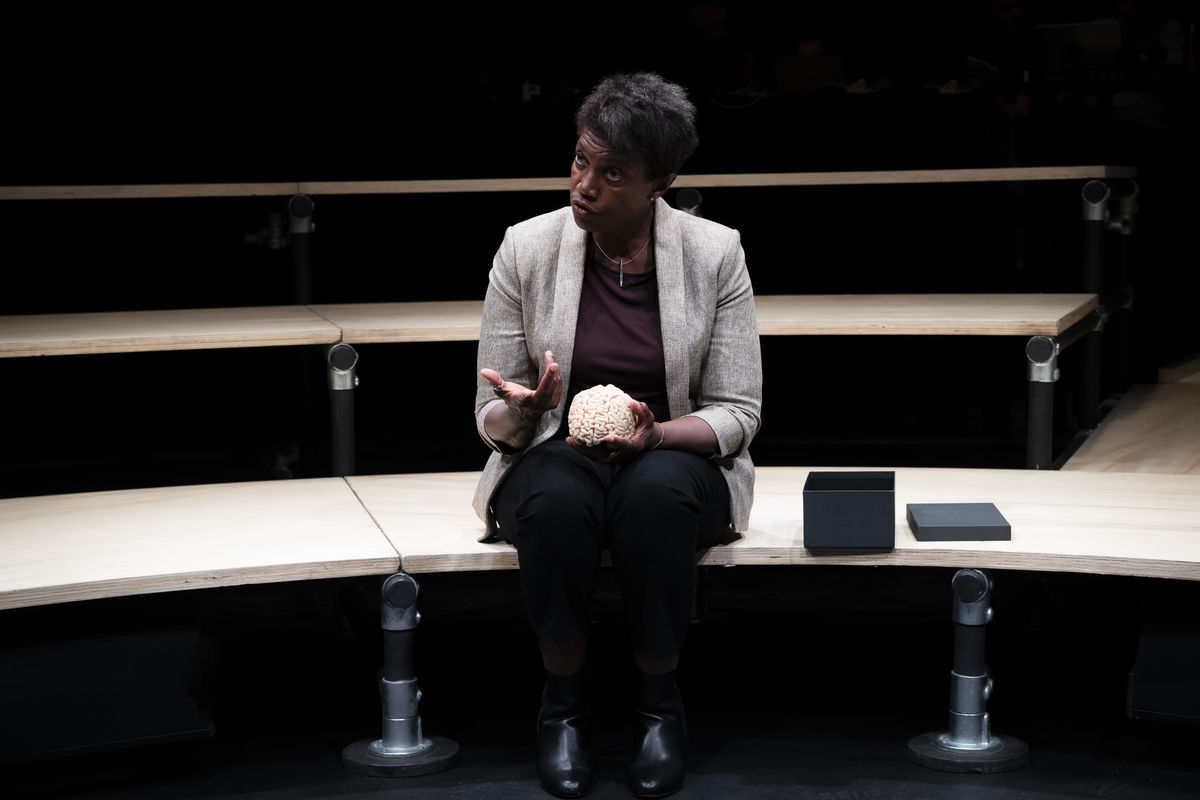 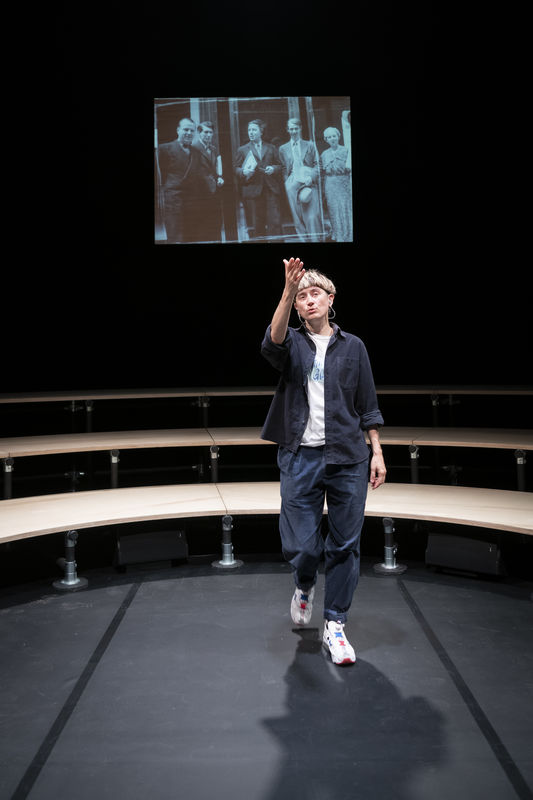 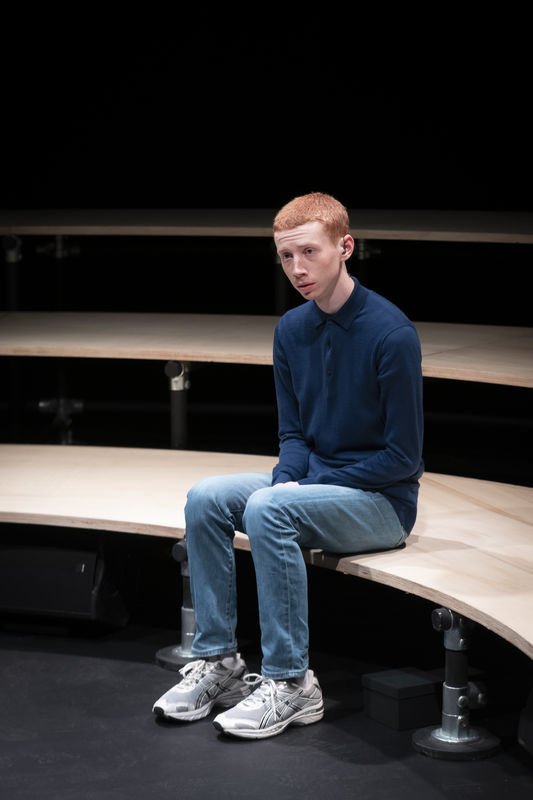 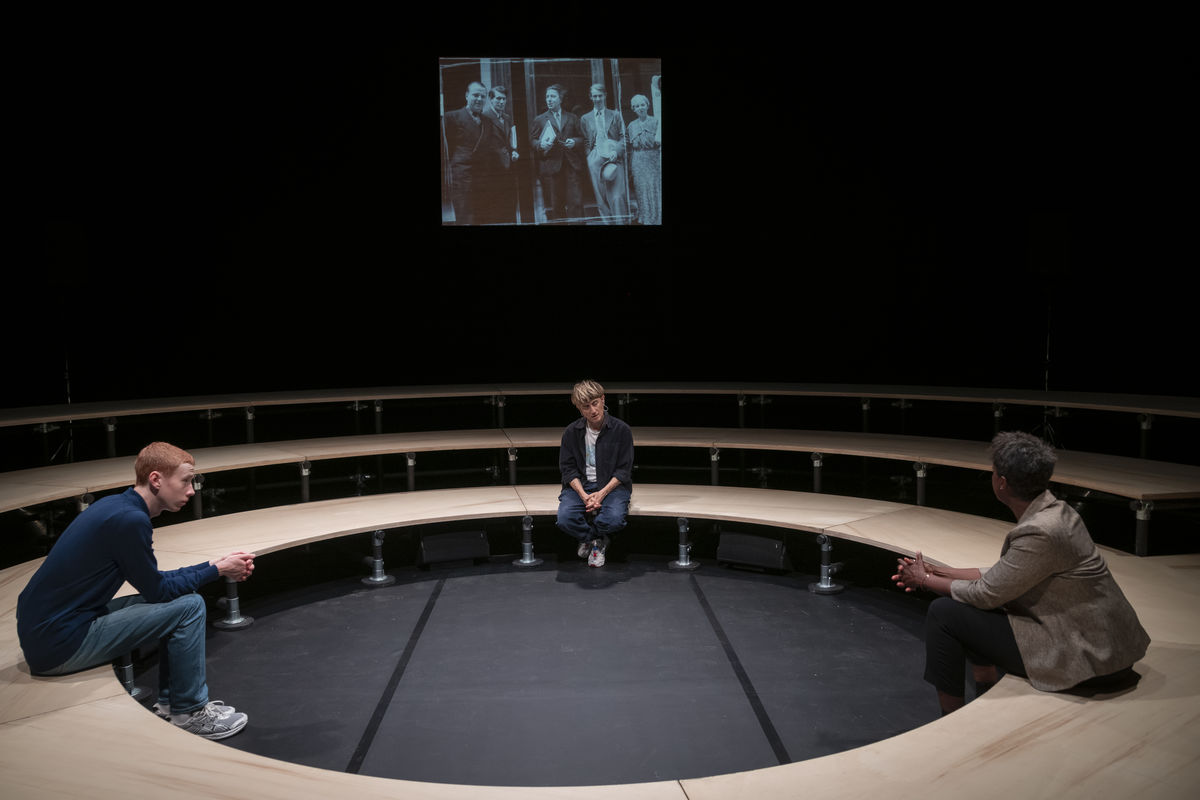 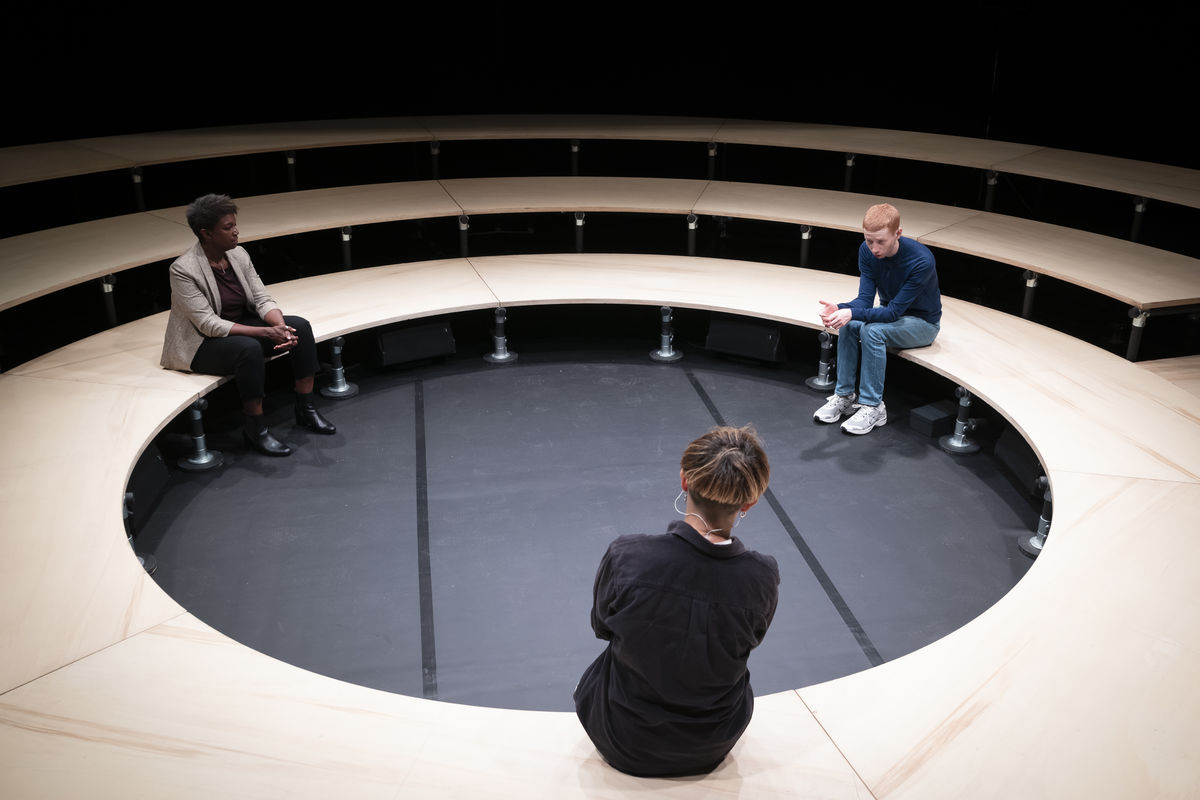 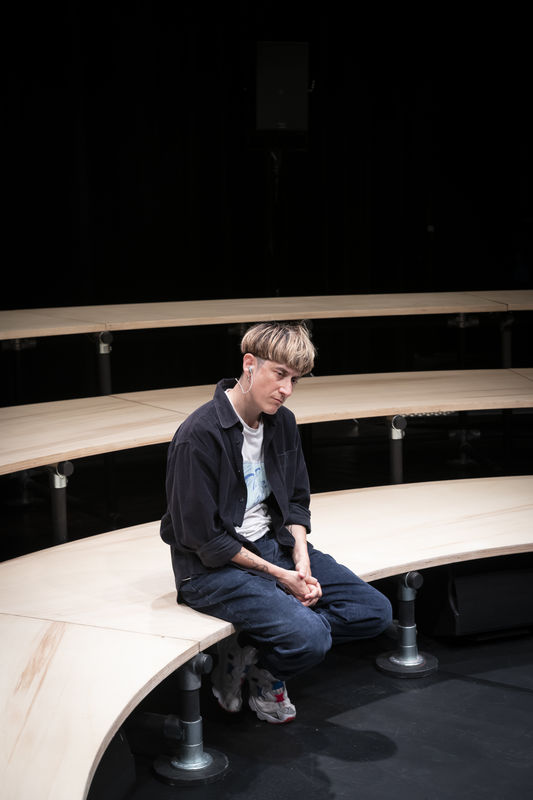 I am intrigued when Swedish director, playwright, and filmmaker Marcus Lindeen tells me that nothing visible happens on his stage:

»The audience and the performers sit together in a circle, which is interesting to me as a theatrical situation. It brings intimacy because we sit close to one another, and the characters use their normal speaking voices. Like sitting around the fire telling stories. It’s soft-spoken. The scenography is composed of a round seated structure on three levels, inspired by the arena stages of antique theatre––or the anatomical theatre with medical autopsies as the spectacle––except we do not use the centre as a stage. The stage is gone and replaced by a conversation situation. I’m not that interested in creating a spectacle, or virtuosity of effects. I am more interested in the rawness and concentration of pure storytelling in dialogue form and the images it hopefully creates in the minds of the spectators.«

Is there not, then, something happening in this voided centre? Something suggested by the title of the piece––»L’Aventure invisible«––that Lindeen has brought to the Schaubühne in Berlin for the 2022 iteration of the FIND Festival: the inward journey, our thoughts out there in the middle? The centre of the action is just one that we cannot see.

Marcus Lindeen, now based in Paris from Stockholm, is well known for the first two instalments of his trilogy: »Regretters« and »Wild Minds«, both of which appeared at past FIND festivals. The final piece, »L’Aventure invisible«, comes more than a decade after the first, and in French. The entire trilogy will be presented this fall, at the Festival d'Automne in Paris.

Lindeen tells me, »It came retrospectively that these three works have something to do with each other. »Regretters« was my first work as playwright and director, at that time I didn’t imagine that it would be the beginning of a trilogy.«

»What were the connections that you saw between these plays?« I ask.

»A search for a deconstruction of the I. Who am I? The questioning of the idea of identity as something singular, solid, hidden deep inside, that we are supposed to unveil through our lives in search of ourselves. All three plays question that somehow. I am interested in this not only in an existential way, but also in a particular way, in terms of being queer: what does it mean to present yourself, as gay rather than straight, in my case. In all three, the queer theme is there.«

He explains how »Regretters« is about the identity gymnastics of those who come out as another gender, go through reassignment surgery, and then regret their decisions. »Wild Minds«, on the other hand, is about extreme fantasizers, who begin to live more in their secret fantasy lives than in their real lives.

»In »L’Aventure invisible«, he explains, »It’s the same quest, but in different ways, with three different stories of individuals that go through different identity transformations, and how that changes them.«

The first of these stories is that of Jérôme Hamon, the first man to receive two facial transplants, in the years 2010 and 2018 in France.

»Hamon goes through a radical transformation twice because his body rejects his first face, and he almost loses his life as a consequence. His story has a tabloid side, but it also has mythological value. I scan a lot of material, saving a lot of stories, and when I stumbled upon Hamon’s story, I knew I could make something of it. Even if he told me what I already knew from the newspapers, I knew I could do something with it––«

»But I presume you found out much more––« I suggest.

»Yes, in the process of interviewing him, he took me places I never expected. There is this moment in the middle of the second transformation when they couldn’t find him a new donor immediately. He ended up spending six weeks in a hospital with no face. He was closed-up inside of himself, with no way of communicating. He had no mouth, he could not see, he had trouble hearing. This blew my mind: I was curious about what happened inside of him because he was awake and not in a coma. »You will go through something horrible«, said his surgeon, »You need to prepare yourself«. He talked about keeping his mind active, building mental labyrinths before he got this new face––this third face––which came from a man much younger than him. I wondered what it meant to be in this in-between stage when you don’t have an outer identity. And will Hamon be the same person afterwards? Is he only changing masks?«

The other two characters––and do come to the show to learn more––are Jill Bolte Taylor a brain scientist, and author of »A Stroke of Insight«, who has a stroke which leaves her without a memory of her previous identity, and the British visual artist Sarah Pucill, who reflects on the photographs of the queer French artist, and anti-Nazi resistor, Claude Cahun.

»Cahun was the starting point for the whole project. I started to research her life: a story of her and her girlfriend’s lives on the island of Jersey, and their secret resistance to the German occupation there. I had also started to read her surrealist poems and there was a title that caught my attention: »L’Aventure invisible«. There was something profound and mythic about it, but at the same time, it also sounded like a naïve cartoon. It’s like the title of a Tintin album. I loved that. It was beautiful and stayed in my notebook for many years. I knew I wanted to do something with the title: the »Invisible Adventure.«

»And so, when I got a commission from a theatre in Normandy to make this piece, I went with my French-Swedish dramaturg, translator, and artistic collaborator, Marianne Ségol­-Samoy, to Jersey, to her grave, to her archive, I re-enacted aspects of her life. »L’Aventure invisible« became eventually a play based on three interviews, coming together as one fictional conversation. Even if the texts are those of me talking to each of them––Hamon, Bolte, and Pucill––the piece creates the illusion of them talking to each other.«

The actors on stage are, in fact, listening to a script through earpieces, imitating the voices of other readers. Lindeen’s technique––also used in »Wild Minds«––of mimicking someone not present on stage, creates a feeling of defamiliarization, of disconnectedness. It recognises both the dependence on documentary sources and their transformation by the director. Perhaps too, in this mimicry––like a mirrored mirror––there is a sense of the identity problems that are at the heart of the piece. What makes us who we are? Do we take a mentalistic (or »Lockean«) or physicalist position on the subject? And what happens when we are mentally, or even physically, substituted? And how can we, when these transformations happen invisibly, recognise them?