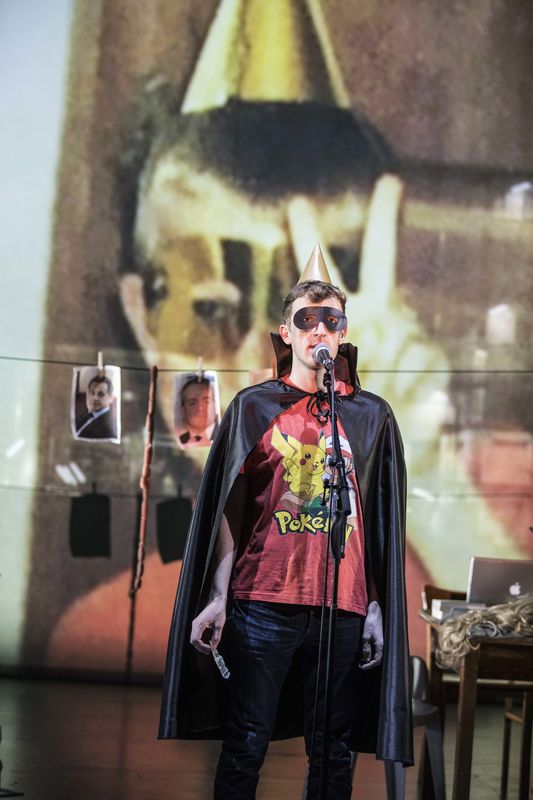 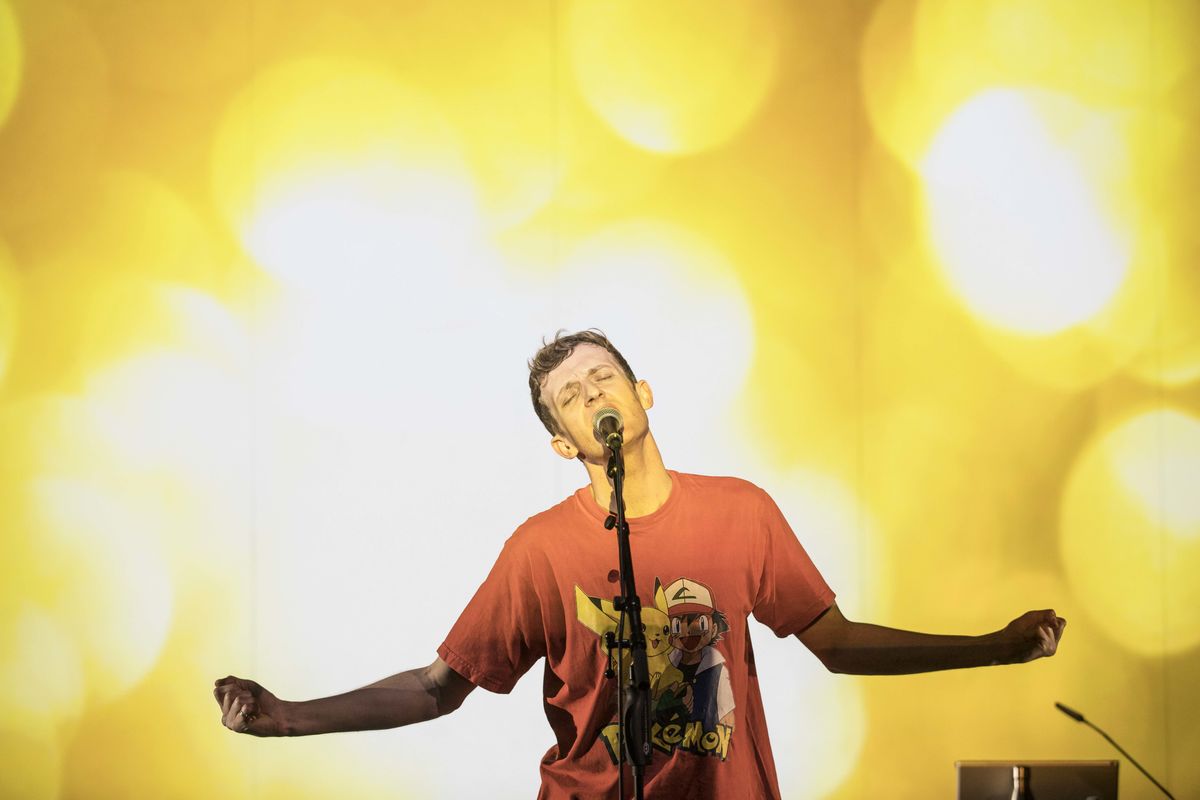 A young, lanky man, in a grey hoodie and black jeans, sits at a square table before a laptop, a pile of books, a thermos, a wig, and a reading lamp. There is a plastic garden chair and, in one corner, a pleather armchair. There’s a whiff of poverty about this simplicity, an aesthetic that lends a diffuse »authenticity«, or everyday truth, to the scene. This man stands up and wanders across the bare stage. The minimalism imparts another feeling: that we are still rehearsing, even when in performance, and that ideas are still forming, unfinished, and in process. The man pulls off his hoodie, to reveal a printed t-shirt. He arranges his hair, nervously. He is the picture of an urban millennial. Any member of the audience, I think, will also be struck by the man’s disarming naturalness on stage – something surprising as he is an author and not a professional actor – and how he takes his time, as if he really is occupying a desk in his own apartment.

It all seems so everyday … until we notice how the man is also illuminated by stage lights, and how there is an enormous video projection screen, two stories high, rising behind him. Larger-than-life, it makes our protagonist loom in music-video proportions. For while the character and his text appear quotidian, the doubling we observe on stage suggests something else: both the politics that stand behind this theatre piece (we will get to them) and the man’s identity. The narrator with a teenager gait is, of course, now a household name in France: Édouard Louis.

I am sitting at a rehearsal of »Qui a tué mon père« (notice: no question mark), a day before its German premiere at Berlin’s Schaubühne theatre. The production is an adaptation of Louis’s third novel. Director Thomas Ostermeier is again taking on the difficult task of adapting prose’s expansive duration to a clipped stage’s rhythm. He does this by moving the narration around the stage spatially: Louis is sitting at his computer composing his words out loud in clear, metropolitan French. His story is told on the video screen, with images of the same man at a beach in his native Picardie, chasing the margins of the retreating tide in his white-soled sneakers. He fills the space of the apartment, dancing out a memory. This mashup of monologue, video, and movement transforms what might otherwise risk being a static, staged reading into action I think the audience will find dynamic and fluid. This dispersion of the prose is also a way of interrogating it from different angles, a theatre laboratory for a work of autofiction.

Louis’s work engages with pressing political circumstances, that ground this aesthetic of an everyday, lived reality. I see him skipping across stage to a pop song: his playful movements are disarming, while the content matter is anything but light: a gay man’s dissection of his abusive relationship with a now ill father –ageing before his time –and where the political responsibility for the illness lies.

The central question, as Louis explains to the Schaubühne, is: »What does it mean to have a body that politics has destroyed? And I say this at the very beginning of the production: to have a certain body in society, to be non-white, to be a woman, to be transgender, to be a worker, is to be subject to premature destruction«. Indeed, »Qui a tué mon père« is not just about a particular working-class father and his come-good-and-moved-to-the-city son. It is about how neoliberal reforms, and austerity, have deteriorated the social net that connects many such family members. The political background is all the more piquant as we now, in October 2021, head towards the French presidential elections next Spring and far-right populists such as Éric Zemmour surge in the polls.

Ostermeier is up on-stage, making small adjustments. It’s the first day that the production is rehearsing in the Schaubühne’s Globe Theatre, a two-tiered Shakespearian affair in the half-round. Thomas tweaks the microphone, or the angle of a chair, before moving around to different seats in the space to make sure Louis is used to looking everywhere: I’ve been placed in a top rung so he has a face to target in the rafters. For a minute, I actually feel like I might be useful! The conversation below, meanwhile, jumps easily between French and German. The lights adjust, Louis takes in the entire theatre space, and then breaks into a joyful, unabashedly camp song from a movie.

Certainly, one of the most gripping aspects of seeing this Edouard Louis production is that Edouard Louis himself is on stage. Autofiction can be defined as a narrative that confuses the author and narrator. It is the Zeitgeist, at a time when the voyeuristic consumption of »real dramas« has never been more at our fingertips through social media. The fact that »stranger-than-fiction« reality can be so productive artistically can throw invented stories into a ridiculous light. As the English novelist, Rachel Cusk, famously said in a 2014 Guardian interview, fiction is: fake and embarrassing … Making up John and Jane and having them do things together is… utterly ridiculous. Yet my mode of autobiography has come to an end. I could not do it without being misunderstood and making people angry … I’m certain autobiography is increasingly the only form in all the arts. Description, character – these are dead or dying in reality as well as in art.

Louis has a similar line of thinking, stating that »the autobiographical form … is one of the most innovative today for trying to think through reality. I believe that it even gives us the possibility to create a new avant-garde in art«.

Yet, are Edouard Louis’s four novels – »The End of Eddy« (2014), »History of Violence« (2016), »Who Killed My Father« (2018), and »Battles and Metamorphoses of a Woman« (2021)––purely autobiographical portraits of his abusive childhood as a gay man growing up in an impoverished, working-class, right-wing region of northern France? Or are there elements – as his family who feel they have been unjustly exposed assert – that have been fabricated? Is there a clue in the fact that he and his publisher, Seuil, dub these works novels, or »romans«? Louis, in a 2018 interview at the Théâtre National de Strasbourg, teases us, with a comparison to a scene from Almodóvar’s film »All About My Mother«: It’s theatre that has told me: you have the right to play roles. It’s good to play roles, it’s as authentic as other things. There’s a scene that I love to refer to, one of the most beautiful scenes in the world, in the film of Almodóvar when Agrado lists all the plastic surgeries she has had: my breast cost 40 000 pesos, my cheeks 30 000, my nose 10 000. Agrado says, »Everything that is plastic is my authenticity, because it is what I wanted«. It’s perhaps banal to say, but it is theatre which allowed me also to believe this.

I think it is precisely the ambiguous border between fiction and non-fiction – a kind of »false objectivity«, to use the term used to describe the work of another queer, first-person narrator, Christopher Isherwood – that makes these texts intriguing, feeding our desire for »true stories« while keeping the tradition of fiction writing alive.

The doubling of the ordinary with the unordinary (read: famous) that we saw in the on-stage aesthetics mirrors these dynamics in Louis’s text, also operating potentially on two levels. One of the best justifications, I think, for bringing Louis’s novel on stage is that it accentuates this confusion. We are confronted with the body of the man willing to take the risks (and losses) that beleaguered Cusk – of airing one’s »dirty laundry« and being »misunderstood and making people angry«. His dissection of family structures, and the resulting pathos surrounding his difficult relationship with his father, has an unvarnished, unassailable quality when he asks us directly: »Is it normal to be ashamed to love?« Having such a shy, sweet, disarming and natural young narrator present, in the flesh – rather than as some conjured persona that we imagine behind the rows of typeface – also exudes an »authenticity« that raises our level of trust, while at the same time leaving us with the sneaky feeling that a fiction is still lurking in the corner somewhere.

The set-up brings together two impulses an audience has, when either going to the theatre or when reading a book: the desire to see actors as the characters that they play on stage, and the habit of conflating the author for the first-person narrator of their book. We are given the opportunity to make these mistakes twice in this production, and still to doubt ourselves as we correct them. After all, every word might be true.