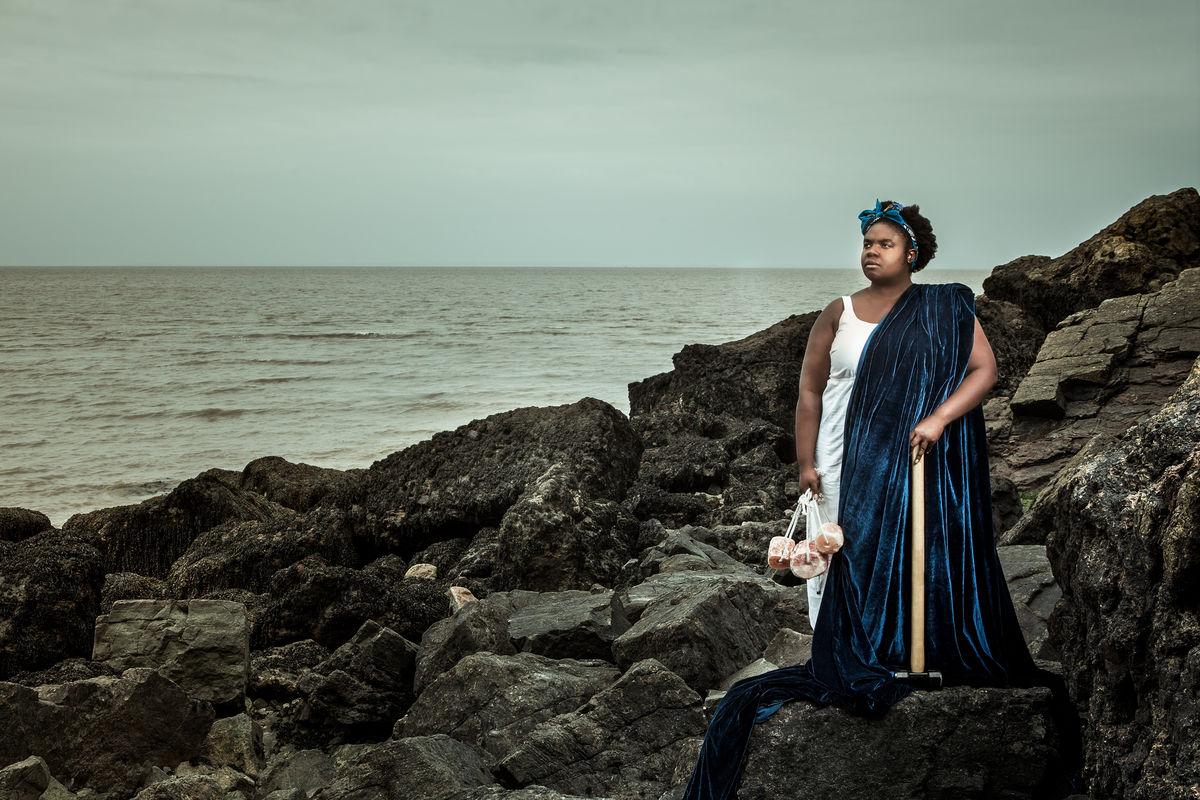 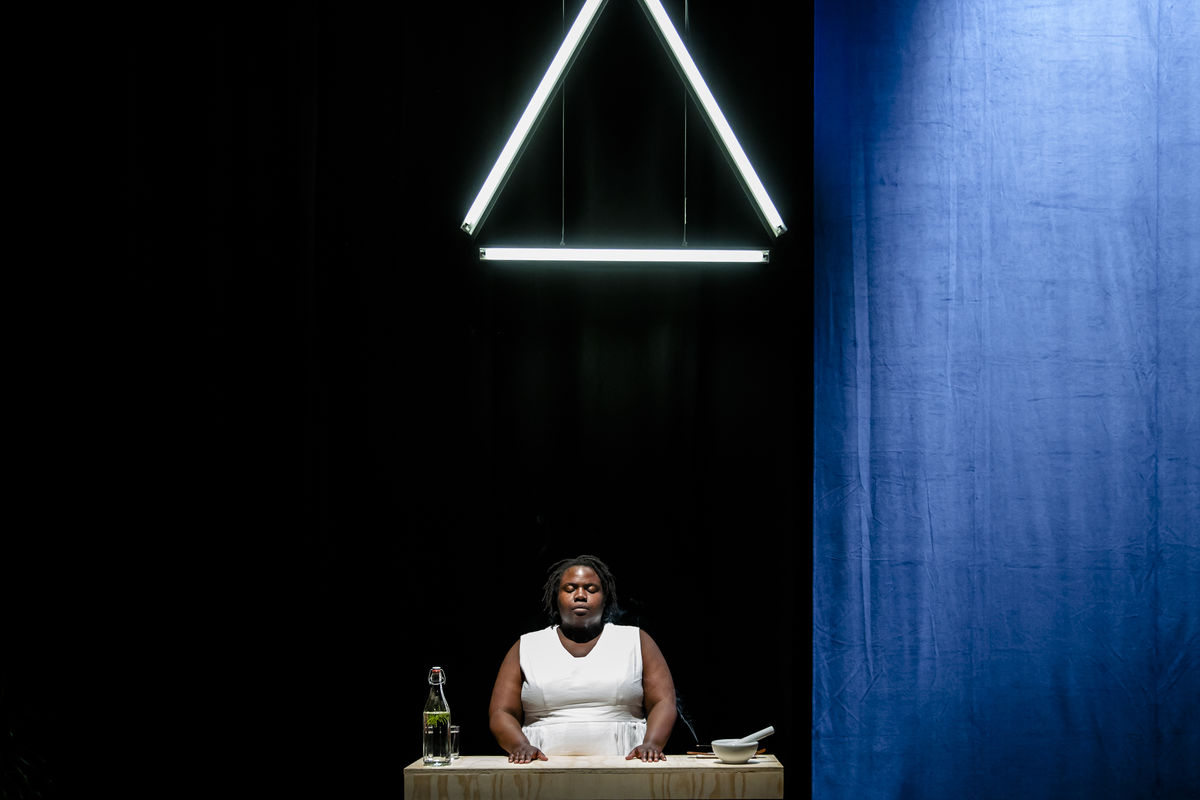 Note: the performance of »salt.« has been cancelled at FIND-2021 due to health reasons but the director’s film based on the performance will be shown at the Schaubühne. We print this interview with the director nevertheless and invite you to her film.

Selina Thompson, author and performer of »salt.« at the Schaubühne’s FIND#20 festival, tells me: »I made »salt.«  because I wanted to make a show about the afterlife of slavery and colonialism that didn’t depend on the presentation of black people and the black body as abject to make its point. I wanted to make a show that very clearly placed Europe and the UK in the triangle of the Transatlantic Slave Trade. How History has been written often obscures and hides the place of slavery within it, how it shapes the way it treats black folks today. I think that this is also true of Germany«.

How will a Berlin audience engage with Thompson’s story? She travelled by freighter across the Atlantic, on the same route her ancestors took as slaves from Ghana to Jamaica and then to Britain (she is now based in Birmingham). She brings to the stage reflections on the continuities of racism and colonial power in today’s Britain, and what it means for her to be Black British in a majority white country.

Between the 16th and 19th centuries, the Atlantic Slave trade involved the trafficking of some 13 million people from Central and West Africa to the New World to work on agricultural plantations, in construction, mines, or domestic settings. It caused millions of early deaths and untold human suffering. 2.3 million slaves alone were sent from Africa to the British Caribbean. Historians have since grappled with how today’s European prosperity was based on this exploitation, how the slave trade figured decisively in financing Europe’s industrial revolution.

Germany’s involvement in the Atlantic slave trade is not a major part of this country’s memorial culture, as it focuses on more recent crimes. Germany often frames the Atlantic slave trade as the work of other European powers, such as the Netherlands, France, Spain and Britain. After all, Germany did not exist as a unified country until 1871. Nonetheless, Germans profited from these global trade networks. Wealthy German families held economic titles to slave foundations and acted as financiers of the slave trade. Not only were Germans successful as individual traders but slavery was a State concern. The Brandenburgisch-Afrikanische Compagnie, founded by Friedrich Wilhelm, for example, brought 19 000 slaves from Africa to the Caribbean between 1682 and 1717 alone. In a united Germany, persistent and brutal exploitation in Africa continued, as one sees with the fates of the Herero and Nama people of Namibia.

There is the temptation to think of colonial exploitation as the distant past, which occurred in distant lands. But Thompson makes the argument that past exploitation connects with the present, » We don’t live in post-racial times, we don’t live in a post-colonial or post-slavery world. Not while we live in a time of mass incarceration on both sides of the Atlantic, not when the tourism industry as it is currently set up enables people to play out modern reinventions of colonialism. As the world gets smaller and easier to traverse––as climate change ramps up and people begin to move and move and then move again––our notions of home and our relationships to each other are going to change. We need to start thinking practically about how we’re going to live together better. That history is where we start that thinking. Putting ourselves in each other’s shoes and being honest about what we learn about ourselves by doing that is how we figure it out. We are living in what I would describe as a very white moment in our history––a point at which things racially could change, or not. And I want to be part of what is pushing for that change, in my own way«.

In Britain, the continuity of the slave trade is tangibly felt. One example: until 2015, British taxpayers were still paying off the 300 billion pound loan (in today’s coin) that it took out after the signing of the Slavery Abolition Act in 1833, to compensate slave owners for their loss of property. Meanwhile, the British state has never officially apologised for its role in the Atlantic slave trade. I ask Thompson how particular Black British stories connect with this history, and how her performance has made in-roads in spurring a more critical memorial culture.

She replies, »There are around two million black people in Britain, and each of them will have a unique relationship with the afterlife of slavery. I cannot speak on their behalf, or as the representative of such a varied and large group. As an artist, I speak only for myself. The same applies to the threads that link us to the past. Suffice to say that the relationship between Europe and Africa is a deep, complex, violent history, and all of us negotiate it day in, day out. I don’t know if »salt.«  has achieved anything politically. The real work does not happen in the theatre. If it happens at all it happens outside of it, and as an artist, you never truly get to see or know that«.

»You made a tough journey across the Atlantic. When you returned, how did it change you? And how did the text and production come together in light of these experiences?« I ask.

She replies, »The biggest change––for reasons that are obvious once you see the show––is that I decided to move back to the city I grew up in to be close to my parents and sister. I have bipolar disorder, so can experience bouts of depression, but I think the work changed how I thought about suicide when those depressive episodes were at their worst. »salt.«  came together over two years of writing, rewriting, performing and re-performing with support from a team that included two dramaturgs, a designer, a director, a lighting designer and a composer and sound designer. It took a long time and great care to get it to the quality I wanted it to be, deciding what to include, and what not to include, and how to frame things so there was an emotional arc but it remained rooted in politics––this was the great challenge of the work. I think we did that, and it was the creative process after the journey, rather than the journey itself that I am most proud of«.

Interview with the director took place in March 2020.