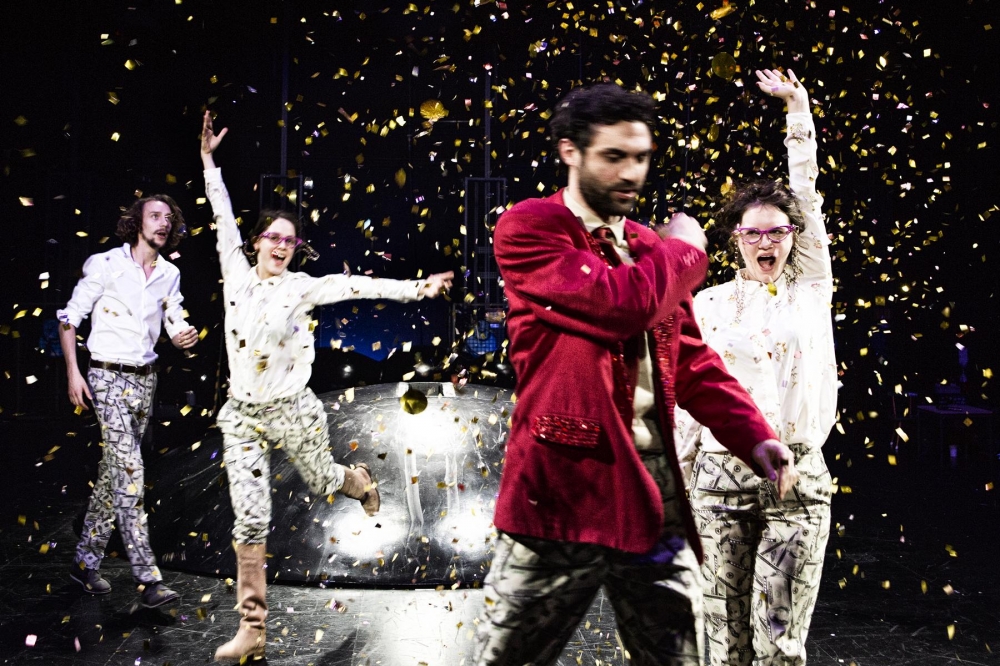 Mina Salehpour (*1985, Tehran) is a well-known presence at the Schaubühne, premiering at the 2014 F.I.N.D. Festival with »This Grave is too Small for me«. The piece was a comedy about the 1914 assassination of Archduke Franz Ferdinand, well timed for the 100th anniversary of World War One. If this sounds somewhat irreverent to you, welcome to Salehpour territory. Both »This Grave…« and her new production – »≈ [approximately equal]«, by Swedish-Tunisian playwright, Jonas Hassen Khemiri – depart from theatrical traditions in which one is obliged to treat »serious« topics with a »serious« tone.

»The challenge – and what is also fantastic – about treating serious topics with humour, is finding comedy in tragedy, or tragedy in comedy«, Salehpour tells me, »While difficult, it is worth the effort. There is already a great German tradition from which to draw. I’m thinking now of my hero (Lieblingsheld) George Tabori.«

»The approach is nonetheless risky. I have worked with themes such as Nazism or refugees, and I have been criticised, especially in Germany, for not taking such material seriously enough. I have been told each time that my work is too absurd, that there are too many jokes, or even that it is arrogant. But that is not my intention.«

»I wish instead to crack things open with laughter and initiate a discussion. I think ›critical‹ is a better word for my approach because it is about creating distance from the problem. One does not remain a prisoner of a system. Instead, one achieves, very much in Brecht’s sense, a v-effekt (estrangement effect). I am interested not in narrating in a documentary fashion, but through fables«, she concludes.

Indeed, one might get a superior perspective on difficult subjects by laughing and floating far above them, and in the meantime not take them any less sincerely. It was Aristotle who wrote that comedy is harder to write than tragedy. I think he meant writing comedy that does not simply dismiss our everyday as absurd, as slapstick, as a series of gags. But rather writing comedy that alleviates the suffering of those under greater powers. This form of comedy counters power by destroying its legitimacy with a laugh.

Khemiri’s »≈ [approximately equal]« reminds me a great deal of its Berlin predecessor, Hans Fallada’s »Kleiner Mann – was nun?« (Little Man, What Now?). Both Khemiri’s Andrej, and Fallada’s Pinneberg, are little men who find themselves powerless in a great capitalist machine. While Fallada focuses on how the intimate life of a couple can act as a shield against capital’s injustices, Khemiri shows how neo-liberalism, in fact, penetrates that inner world, making our minds captive to its standards for value.

There is a revealing scene in »≈ [approximately equal]« in which Andrej enters a shop to buy a bottle of champagne.

Salehpour tells me of her own experiences with prejudice, »Who doesn’t know this experience – well, in fact I know plenty of people who don’t know what it is like – to go into a shop and say: I would like this and this and that, and then to be looked at by the wait staff and be asked ›are you sure?‹ And that is exactly this scene. And I find myself using even better German, with complicated constructions, and a few foreign words thrown in, to expel the situation, to say, ›I’ll buy what I want, bitch‹«.

It is worth unravelling this scene in the play to show its nuances. At first, Andrej is asked by the shop assistant whether he wouldn’t rather have a bottle of Sekt than a bottle of champagne (that he might more likely be able to afford). The Sekt is »approximately equal« in content to the bottle of champagne, after all, even though it differs in monetary and prestige value.

At first, Andrej insists on buying champagne, because he wants nothing but »the best« to celebrate his graduation. But when he begins to ponder what else the 40 EUR might buy, he eventually settles for cheaper Sekt. On returning home, he offers his family what he calls »champagne«. An aura of importance rises around the degustation. They then pressure him about how much he spent. Relief descends only when Andrej admits it is Sekt. Rather than be disappointed – because they have been lied to, because Andrej has passed off inferior 6,50 EUR Sekt for an expensive product – his family finally begin to enjoy what they drink.

Khemiri’s astute psychological insight is this collective sigh of relief. It has to do with the question of value, at the center of »≈ [approximately equal]«. Neo-liberalism places different values, both monetary and prestige values, on approximately equal commodities or individuals. Nonetheless, a disjuncture and discomfort occurs when those who have been devalued (because they are poor or outsiders) consume outside their means and station. Only when an equilibration of perceived worth occurs, can they finally enjoy. The scene of Andrej’s Sekt provides, by inference, a striking illustration of how neo-liberalism treats individuals as commodities, and how that mentality enters the psyche of its victims.

Salehpour tells me, »What we might do when we leave the performance is think about what ›value‹ means. This is the concept that interests me most in this piece. Not to talk about how we might save banks or become dropouts. But rather to think about value and significance«.

Salehpour begins her rehearsal with distributing scratch-card lottery tickets to her cast and crew. Everyone pays for their own, but there is some discussion as to whether everyone will share in the winnings. »I don’t want to share!« declares Salehpour joyfully, and I comment that it wouldn’t be in the spirit of a play about the grim realities of neo-liberalism if there were a redistribution of wealth on set. At a break in the snappy read-through of the script, the company gather to see who has a winning card. One by one, they scratch, and lose. Until one actor wins a paltry 20 EUR.

»Think about these scratch cards«, she says, »When unused, they have a possible value of 20 000 EUR. But when they are used up, we discover that they are suddenly worthless, they are trash, they are nothing. What is wealth and significance? Perhaps we are surprised that some used things have greater value, and significance, than new things. What is the value of theatre? For one person it is amazing, for another it is stolen time. This piece is good at discussing these problems.«

When considering the question of »approximately equal« commodities and individuals, branded differently based on their »DOC« (»denomination of verified origin«), one cannot help too but think of the question of racism and the European labour market. Khemiri comes from a multicultural background – he is Tunisian-Swedish. Certainly, many will point to the fact that Salehpour shares his critical insider/outsider perspective because she is Iranian-German (although she says she is rather tired of documenting the »victim role«). The character Andrej is also insider/outsider, as a man with a Slavic-sounding last name, which means his job applications are continually refused. Although his abilities might be the same as another applicant with the same qualifications on the job market, he is branded »from the East«, and, therefore, inferior. He is Sekt to the champagne of a »Swedish« applicant.

»I have discovered that certain themes return in Jonas’ work, and one is the reappearance of characters who are disadvantaged – when looking for a partner, or for a job, for example – because they have a peculiar last name. That I know myself: when applying for an apartment, I hope they are not making decisions based on my last name. It is, of course, more perfidious when it comes to the question of earning money. It is a sad matter when people are trying to draw equal with others when it comes to money. You can be as talented as you like, and try as hard as you can when you work, but, in the end, to be equal in money matters is much more difficult than everyday acceptance«, she tells me.

These questions – how people are valued by a system of capital, how prejudices, often racial, underlie such determinations – are I think at the heart of the struggles of contemporary Europe. Such a sunny, buzzing rehearsal – of happy actor faces, people laughing – might seem an incongruous workshop for a disquisition on the future of European solidarity. But, when we are flattened by the news, by growing inequality, by the miserable prospects faced by waves of new refugees, I somehow think that Mina Salehpour is offering us a way out. We can either laugh our way forward or be crushed by the enormity of our problems. When given the choice, which is more likely to succeed?