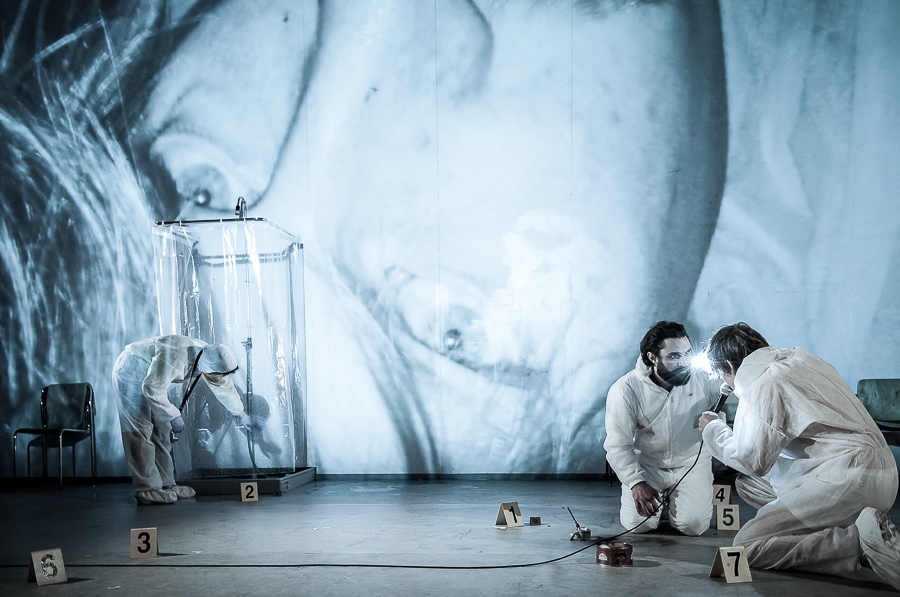 Walk into the Schaubühne’s practice stage and, in the doorway, you will see a bed. It floats, cloudlike, and its sheets would be immaculate, if they were not covered in blood. You are witnessing a crime scene. A young French novelist, Édouard Louis, was raped here. The perpetrator was a man with an immigrant background. »A Maghrebi type«, the police are quick to label him. The circumstances and consequences of this violent act are not just the stuff of theatre. Thomas Ostermeier’s, »History of Violence«, at the Schaubühne, based on Louis’s best-selling novel, goes far beyond the dramatic act. It examines violence’s insidious creep through society’s joints. The sexual violation throws light on limits of liberty (when we are compelled by force), equality (how inequalities of class expose us), and fraternity (when a racist system gets to work).

Ostermeier tells me that »I chose this text because it had an urgency to be told. Questions of class, and classism, are often neglected, even though the society in which we live is increasingly one where differences are based on class. But there are contemporary voices raising this issue of class again – Édouard Louis, Didier Eribon – when for a time they were forgotten«.

This production comes at a moment when the #metoo debate rages in the press. One might presume, given the Zeitgeist, that Ostermeier’s work is about exploring #metoo’s facets of victimhood and power abuse. But the director tells me rather that, »There’s no special link to the #metoo debate here. In the piece, we do not see an abuse of power, a taking advantage by a person of power. Here, you have two disadvantaged people meeting. Part of the tragedy of the story is that they are from the same class. But they don’t recognise one another«.

Who are these two men who meet? Who here is victim and perpetrator?

Louis is played on-stage by Laurenz Laufenberg. In his twenties: blonde, vulnerable, trusting, he is a character who unwisely invites a man he meets in the street into his Parisian apartment. Louis’s background is working-class, from Picardie in the north of France. The abusive childhood he experienced there was the theme of his novel, »The End of Eddy«, which also operates in the domain of »docu-fiction«, which might blur fictional storytelling with lived experiences. Louis’s is a success story of sorts; he came to Paris from the provinces to study at one of the nation’s most prestigious institutions, the École normale supérieure.

Louis has been accused of »prolo-phobia«, as an insider articulating the violence and homophobia of proletarian life from the safety of the capital. But a close reading shows that he is well aware of how the Province reacts – even explodes – when confronted by the often unbearable snobbery of class-conscious Paris. Louis suffers the indignity of being called »pretentious« or an »idiot« or parading his intellect, by his working-class sister (played by the indomitable Alina Stiegler) back home. »History of Violence« is told partly from her perspective: She retells Louis’s experience of rape to her husband (with Christoph Gawenda responding insouciantly) as Louis listens behind a half-open door. Her retelling often paints the victim as responsible for his own fate. The conversation between the city and the country is, in fact, a competition over who controls the narrative of the past.

Édouard Louis was a familiar face around the theatre when his friend Didier Eribon’s book, »Returning to Reims«, was directed last season by Ostermeier. Having met Louis a number of occasions, I was very surprised, when I wandered onto the practice stage for rehearsals of the new production, by how Laurenz Laufenberg had crafted a credible dramatic version of the man, to the extent that one starts believing one is the other. Louis participated in early stages of the production process, teaching Laufenberg even how to walk like him.

»Éduoard was with us in the rehearsals in the beginning«, Ostermeier tells me, »He provided us with new dialogue, to the script adapted by myself and Florian Borchmeyer, when we needed it. He was very helpful, also to have him in rehearsal agreeing with our approach to the novel. This was very important since it’s a delicate story that must be treated with delicacy. The most important thing was to understand why he wrote what he did: because Louis is not just the writer, but also the protagonist«.

Meanwhile, Reda, played by the magnetic Renato Schuch, is the rapist.

The production consulted with a practitioner specialised in trauma and post-traumatic stress disorder. The stages of trauma, as experienced by victims or assault, can be observed as an initial out-of-body experience, when time slows, and one hardly believes that the assault has happened. Later, one loses attentiveness, experiences problems with speech, and has a rollercoaster of emotions. One peculiar symptom is how the sense of smell is augmented. Scent is, of course, a sense strongly connected with memory (it imbues, for example, the word »redolent«). Scent permeates the moment of trauma. Louis cleans his apartment and even his body, trying manically to remove the pungent smell he associates with the perpetrator. Reda’s scent lingers on the sheets where the deed occurred; it becomes a trigger for recurring feelings of violence; his traces are evidence for the criminal inquiry. This investigation, Ostermeier tells me, is part of the »secondary traumatisation«, experienced by victims of violence and sexual abuse who go to the authorities to report a crime, because »the story has to be told again to the police, and to the doctor, to those in forensics establishing proof in order to proceed with the investigation«. One thinks one has put the worst behind, only to have to relive it again.

Reda, as the son of immigrants, is both a Frenchman and the »other«. We can read him both as a co-citizen, whose family story is interwoven into recent French history, as the descendant of a Kabyle, or Berber, family who left Algeria, with the civil war, for the temporary shelters, or »foyers«, which would launch him into the exploitative working world and racism of metropolitan France. But he is also someone who comes from a climate of traditional homophobia and poverty, living in the capital but kept at the margins of Louis’s new world. He is both insider and outsider, which means he has much in common with Louis.

»In the beginning, the fact that Édouard and Reda come from different backgrounds doesn’t create conflict«, says Ostermeier, »In one important sequence, we all of a sudden get to understand the past of Reda. His identity as a second generation immigrant is not an excuse for what he does. But you might see what he does through different lenses when you see where he comes from. Reda’s world is a homophobic culture. It’s a more homophobic culture than ours – not that we’ve solved all problems in the West, but there are cultures where sexuality is a much bigger issue. Reda despises himself for being gay. And he can only resolve his desire for men, and allow himself sexual pleasure, when the act is framed in a robbery. The crime becomes an excuse for living out his desires«. Indeed, sex is only legitimised when it is a tactic for theft (when theft is more likely an excuse for sex). In his strategising, Reda shows that – as so often is the case – his crimes originate in his own victimhood.

I ask Ostermeier how difficult it was to portray acts of violence on stage. It was something I asked of productions during the recent FIND festival: directors are faced with a choice of how explicit to make violence? How does one ratchet up the tension? Make that violence credible, affecting, as we sit in the safety of our theatre seats? In a sense, in prose, violence is always »ob-scena«, or off-stage, but in theatre we can have it right before our eyes.

Thomas tells me, »We wait the whole piece for the moment of rape. This anticipation creates suspense. But what we want is also what a mediatised society expects. It wants to hear: ›it happened like this‹. We don’t want to hear what happened before, how it got there, how the victim was treated. Édouard – in a clever way, an important way – plays at every moment in the narration with this anticipation: is it coming? No, it’s not coming. He toys with our expectations for violence. As for the problem of depicting violence on stage: I’m not sure I’ve solved it. It’s very difficult, and one never knows if the decisions one took were the right ones«.

I reply, »But isn’t this new territory? Not only are you dealing with a subject of class, but it’s class filtered through the experience of male rape, homophobia, and the vulnerability of the male body – not your normal bread and butter on the stage«.

Thomas reminds me that already in 1998, with his production of Ravenhill’s »Shopping and Fucking«, he was dealing with violent sexual abuse of a male teenager. »But it’s true that there isn’t always a text for these subjects, not always a novel or a play that is brave enough to talk about sensitive issues«.

»And do you think it matters that you are a straight director producing a play about gay characters?« I ask.

»I would insist that, as a heterosexual, I can defend these rights. I can speak about vulnerability, without being homosexual. This is important to understand. It is basic for our civilisation that we all take responsibility. That we defend one another. We all need to be part of this conversation. As a theatre-maker, as a person, and as a ›Mensch‹, I want to speak.«

Perhaps this is what is meant by »fraternité«.