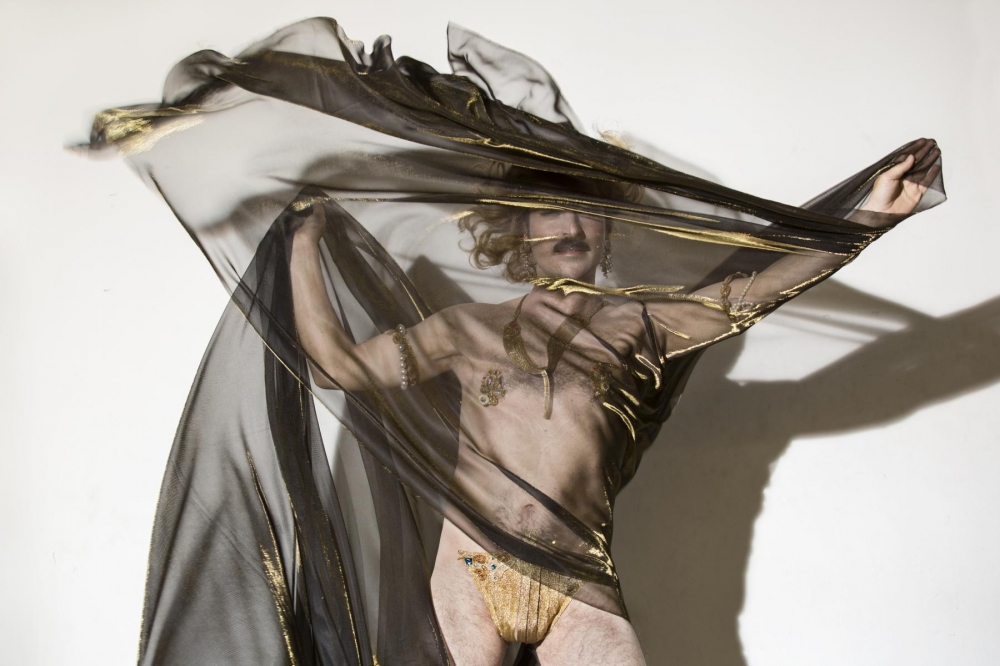 The director Patrick Wengenroth, moustachioed, with his great mop of dark hair, sits across from me with his sugar-free soda, and sparkles in his eyes, as he explains the premise of »thisisitgirl«. He says, »The men mirror the women and the women mirror the men, but at times, reflected in this way, the men can’t go on. While there is some debate as to whether there is ›feminism‹ any more, or twenty or more feminisms, I do think one central issue is, in terms of theatre, that women wish to write their own roles, instead of just being actors of roles that are offered to them by men or by society«.

I look back at the company of the new production that has spilled out from the Studio onto the pavement in front of the Schaubühne café. They look surprisingly fresh, eager, despite weeks of rehearsals, or maybe that is just my anticipation for the new season. They discuss animatedly, and I wonder how they might take Wengenroth at his word – whether the women among them will indeed »write their own roles«.

So I ask him, »Who wrote the script to ›thisisitgirl‹?«

Wengenroth answers directly: »You know, we did not start with a script. We scripted it all together on stage. We first exchanged information, presenting texts on the history of feminism and contemporary debates. We spent time talking very privately, reflecting on our own relationships, how we raise our children, the roles our parents had when we grew up. Now we have entered the final process, in the last two weeks, of working with the stage mechanisms exploring these dilemmas. Feminism has proved to be a way of overcoming great challenges for both women and men alike. And I think everything that is challenging is good«.

It is the »fourth-wave feminism« of the past half decade that inspires this production. These feminisms distinguish themselves from the suffragette’s movement, the theoretical texts of the post-war period, the 70s and more recently, because of the influence of new media, pop culture, and the confrontation with neuroscience. In the German Twittersphere, Anne Wizorek’s hashtag campaign, #Aufschrei, to rally women to report on sexist attacks, is just one example of a sea-change. One might reconsider too the suicide of poet Sylvia Plath – what if she had had the internet, how would she have connected out of her loneliness to a community of women? As Wengenroth says, »The history of publishing is patriarchal. Now with the internet, women can connect, you are able to become your own publisher. It is an important thing: I can define my role«.

Fourth-wave feminism builds on Judith Butler’s earlier contributions – where gender is a performance, repeated and presumed natural, instead of an ontology – or the historical dialectics of Shulamith Firestone and her utopian hopes for an end to the nuclear family. But the contemporary language could not be more different, a reaction to the previous generation’s fetishism of theoretical jargon – more often the fault of acolytes than the theorists themselves. You only need to read British 20-something activist Laurie Penny, who advocates queer/feminist revolution with delicious crudeness, to get the point: »I call myself a feminist to fuck with people, and because it’s a great way to weed out the creeps in bars, but feminism isn’t an identity. Feminism is a process. Call yourself what you like. The important thing is what you fight for. Begin it now«. This new feminism – and its interlocutors in Germany or Switzerland, such as the Swiss Michèle Roten – makes its point with a punch not a lesson. Penny links women’s subjugation to neo-liberal control, a patriarchy that also exerts power on subaltern sexualities, races, and refugees, demanding that they »man up«. It traps even the fragile egos of its patriarchs, in a chainmail of expectation.

I sometimes wonder what would happen if you placed Laurie Penny in the same room with Lena Dunham, the American pop-feminist writer of the 20-something millennial generation. The production’s dramaturge Giulia Baldelli agreed with me that it would make an interesting theatre piece (or shouting match). Dunham is known best for her HBO series »Girls« and her bestseller, »Not That Kind of Girl«. Unlike Penny, she does not call into question her position of economic privilege, and she shifts the focus to confessional lived experience: the texture of her uterus, her eating disorders, date rape, her mother’s Dior, or family holidays in the Caribbean. And yet, Dunham is wry and punchy in her self-investigations, in the tradition of personal-is-political, confronting body-shaming, promiscuity-baiting, and sexual harassment.

This collection of texts – Butler, Firestone, Penny, Dunham, and others including the electrifying Nigerian novelist Chimamanda Ngozi Adichie – are just the point of departure. Wengenroth takes another sip from his soda and puts one hand through his charcoal hair, and tells me, »The more I read, the more I talk to the many women involved in the production, the less I know. But that’s good. The more I get involved, the more ›gender trouble‹ I have myself«.

And yet, I am interested in how, after reading all these texts, one can remain a direct-or, in a position of control.

»It’s a huge problem. Staging a play as a director is always an act of patriarchy. How can a director decide how to stage ›feminism‹, which is a more collective, non-aggressive, and anti-authoritarian phenomenon. But just being aware of this, one tries to make it work out in terms of division of labour. One is the better writer, another is a better dramaturge. I am not a good technician, but maybe I have more intuition for the rhythm of a play on stage. From the beginning, we each drew from each other’s talents. Especially in Germany, the director is in the end an authority – ›I want it like this‹ – he is asked to be a perfectionist. But I want to create a mess in the studio, but a mess with a structure. It would be great if we could make a big mess, and then the crew puts the pieces back together in their own way«.

The compensations paid for the patriarchy of making theatre – the attenuation of a collaborative script, attention to a meritocratic division of labour, a questioning of the role of the director – must finally give the piece dynamism. I am not entirely sure of my metaphors, but I venture, »Theatre then becomes a process rather than a statue«.

Wengenroth says, »Often I see ›perfect‹ theatre plays and they are great, but they are not what interests me about theatre. They are interesting because they are produced live. But then they are supposed to be produced and reproduced live always in the same way. In our case, we choose to rehearse for a short time. I used to rehearse only two weeks before a premiere, as with my piece ›Christiane F.‹, but this time I have three and a half or four weeks. For me, it is normal in theatre not to present something that is 100% ready, because it is never ready and without the audience’s presence it is not complete. I can sing, dance on stage, recite an intense dialogue, but I always need, in the end, a live reaction to shape the thing. With ›Christiane F.‹, which luckily has had a run of 75 performances, it was only after the tenth or fifteenth show that we could say, ›now it’s ok‹«.

There must be a fairly tight structure, however, within which these experiments, and so many texts, are allowed to play out differently with each performance. I ask what the company is planning on stage.

»Perhaps we’ve been a little inspired by Lena Dunham. As of now, the stage is a little like a film set, one that reminds us of an analyst’s room, where an actress is the therapist. Men come to her with their gender troubles and panic attacks. Butler’s ideas of performing gender are good for the theatre, because from performances in the theatre we can then go on to how we perform every day«.

I do have one last question, about how feminism – sometimes seen as »strident« or »anti-male« – has gained a bad name, even among many women. I ask Wengenroth, »What does your production do to change this regrettable discussion?«

Wengenroth replies, »Laurie Penny chose to see feminism as an attack on neoliberalism – you don’t succeed when you succeed alone. Feminism is about much more than just women. Men have plenty to thank feminism for: they suddenly see they are asked to fulfil a role they don’t want. There are studies asking men whether they wouldn’t rather work 30 instead of 50 or 40 hours a week. They would, but it’s not just the question of income that then comes in the way. In Germany, and even more so in Switzerland, if you reduce your hours, and want to have more contact with your family, you are called unmanly«.

And indeed, as Laurie Penny has argued, it’s not only men and women who will be required to change, but the expectations of an entire system.