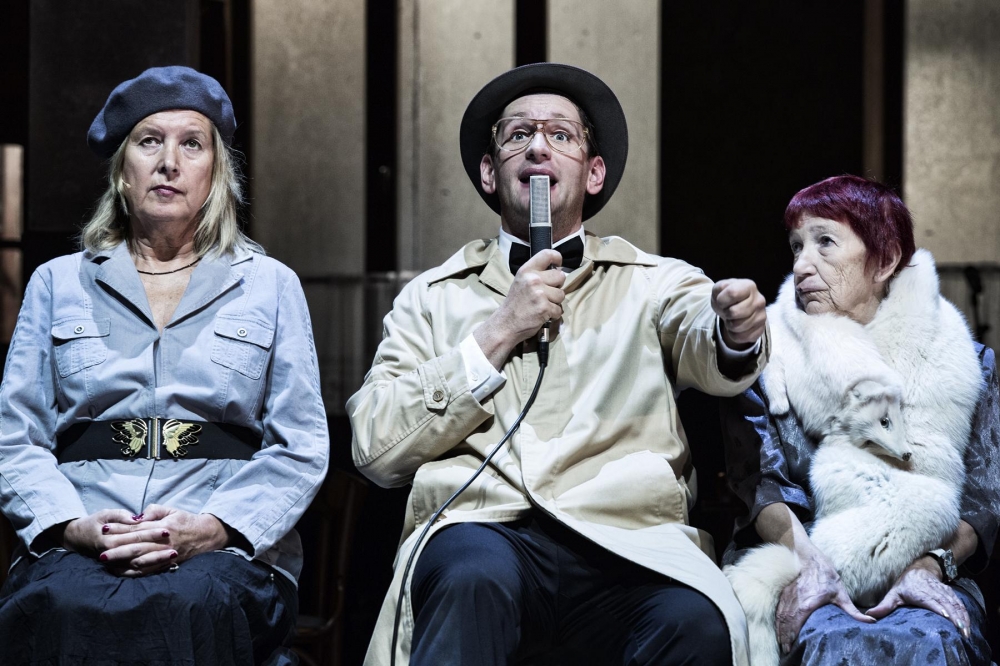 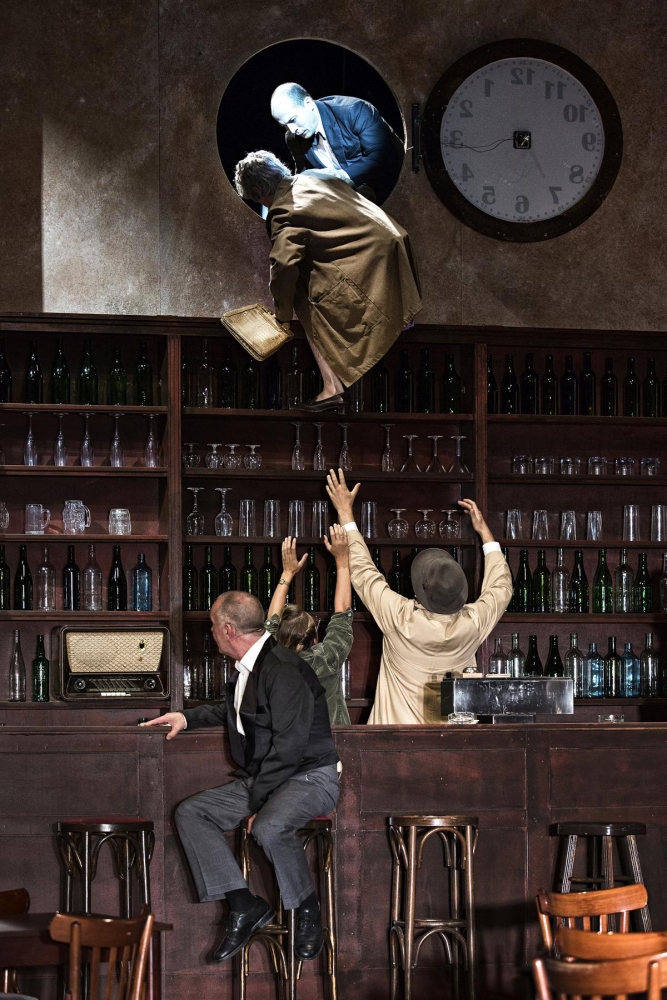 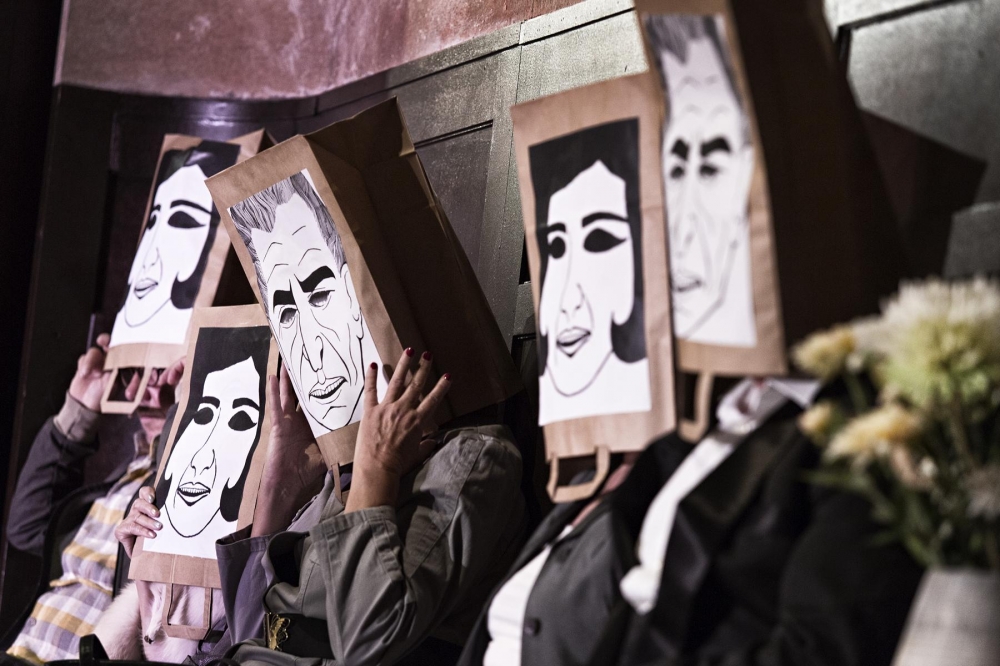 Do you remember the ›island in the red sea‹? Perhaps West Berlin occupied most of your life and is still redolent in places that have meaning to you. Or perhaps it is definitively relegated to history, a city where you were born but that only older people remember. Perhaps it was where you couldn’t go, until it came to you? Can theatre bring back the feeling of a world that, for some, has only recently vanished? Can it make that world familiar to those who never knew it?

When I attend a rehearsal of the Schaubühne’s new production, »West Berlin«, the actors are sitting at a long bar, reciting names of all the famous West Berliners that they can think of, and wondering whether they are still alive. They then rush to stretch themselves up against a wall to repose the famous Kommune 1 photograph by Thomas Hesterberg (they do this fully clothed, mind you). Director Rainald Grebe – the well-known singer-songwriter and Kabarettist – mixes with the company on stage nodding and making small adjustments in a quiet voice.

Once we are outside he puts on his mirrored sunglasses and explains, »Yes, we’re looking for names. Berlin was a small world, a closed city in a closed period. And those two million West Berliners knew each other rather well. But who knows all those names today? I keep thinking about our audience: I think that the old man who knows everything won’t be aware that sitting next to him is someone who doesn’t know anything about what it was like before Die Wende«.

Indeed, the challenge and the interest of the new production »West Berlin« is that of staging of a lost world that remains for half the audience lived history. And what better way to respond to this past, but to put on stage those same Berliners who experienced it.

Grebe tells me, »Something I like to do is mix actors who were not there with actual witnesses to the history. The evening has ›real ones‹ and their stories from back then. We call them ›extras‹ but, in fact, they occupy the main roles. As a rough structure, we have seven stories from seven people. Two speak from their political experience, in left-wing politics, or the squatting scene. The extras came from different parts of the West Berlin scene – film, photography, or politics, for example. Our oldest is 84 years old and has lived everything from the immediate post-war period to today. Some scenes are acted, some are narrated, we use panorama and collage, and then introduce a monologue or a slide presentation. The entire production takes place in a West Berliner bar, which is our stage, but it is a flexible space that can be manipulated. And then, of course, there’s music: Berliner Lieder from the 50s, or snippets from important Berlin tunes from various decades.« Then he laughs, »You see, I do regional theater!«

Much attention has been paid to the former East of the city, the transformation it underwent with reunification, and the latter-day nostalgia, or Ostalgie, that developed. West Berlin is less often considered when thinking about massive change. Yet, this world, sheltered by State subsidies – often provincial, but creative, and with a youthful and engaged student and political culture – was convulsed by Die Wende. Berlin has recently seen a wave, even internationally, of what might be called Westalgie – growing in 2014 with the David Bowie Exhibit in the Martin Gropius Bau or the West:Berlin exhibit in the Ephraim-Palais.

Grebe tells me: »Westalgie has been on the rise in recent years. Yesterday, we had an interesting discussion with a woman, who is the youngest from our West Berliner extras. She is about 52 years old and came to Berlin in the 80s. Our trainee assistants, who are about 20 years old, sat there and listened to her, and couldn’t quite believe how different the system used to be. We had time back then. We didn’t have problems with money. Now young people are worried about their high school diplomas, their bachelors, and those with money-worries constantly ask, how can I manage? Faced with these pressures, one becomes Westalgic. It was another time. You worked as a waiter six times a month, and you could pay your rent. You had time for nonsense, to be crazy. The evening will consider this change.«

I ask Grebe, »What details come to mind when you think of West Berlin?«

»For a long time, especially in the 50s, West Berlin was very ›German‹ and not so international. Many say they don’t recognise their city anymore. It was also very quiet; with few cars, and you could play on the streets; the West was no Großstadt. It had a particular fashion. There were certain elderly women in the West – with their furs, their very particular West Berliner makeup – who had this hair, these Udo Walz perms. It was all a bit vamped up. I was never at the Schlosspark Theater, but you could find a Bourgeoisie that simply didn’t exist in the East. It was a city of middle-class retailers, in pharmacies for example, who became quite wealthy. We have one extra who ran a flower shop and made a fortune from it. One could, in the 60s, 70s, 80s, make a decent living… simply by working! Imagine that! That class has now disappeared, either because they passed away or because one can no longer be as wealthy from that kind of work. And then, when the Wall fell, there was a loss of significance. Many clubs that were popular in West Berlin closed after Die Wende. The big Zoo station is no longer really a Bahnhof; it’s an S-Bahnhof. Commerce on Ku’damm closed, although it is now coming back. The special status is gone. When one is Westalgic, one remembers we are no longer alone, that the world has come knocking on our door.«

She continues, »The West became an old part of the city, the way it was at the end of the war, with the rubble women.«

Grebe nods, »There was blues in the house.«

I turn to him, »Then again, each generation is nostalgic for its youth. Is not Westalgie – and this talk of ›things were better back then‹ – simply a regret for lost youth?«

Grebe replies, »Yes, I agree, on one side it is about lost youth. But it’s more than that. It is about a change in the system. One to which we cannot return.«

He then goes on to tell me about one of the production’s extras, who moved to Berlin from Bremen to experience the left-alternative scene. At the time, she felt, »What we dream of in Bremen is a reality in Berlin.«

»It was the height of the squatter scene; there were 170 occupied houses at that time, in 1981«, Grebe explains, »Plenty was also happening in music, there was a certain euphoria, something was going on from about 1968 for the next decade. But then there was this feeling in the 80s that things had changed. The squatter scene quickly fell apart, with evictions. Within just two years of when she came from Bremen, it disappeared«.

»She then lived with people in an evicted house in Kreuzberg, on Pfuelstr. 5, where now there are chic lofts and a radio station. Thirty people moved into a factory floor of 1100 m2. One big space, everything open without dividers. Each had his own island, although one had a tent, and the toilets were open too. Then, she explained, they tried everything there, and they had time to do so. They did political work, got involved in the anti-nuclear movement, she studied law. They had a common closet where they put all their clothes, but then a few days later it was empty. All the best pieces had been stashed away. Nobody took care of the house, the heating, for example; they simply lived, and slowly started to rot there. There was this demise that occurred over two or three years. In the end, there were only rats in the space, and exterminators. That was her story, but she wasn’t sad about it, but rather felt: now something new will come along. What interested me was how positive she was, that she found something new.«

We chat further, and I ask, »You are of course well known for your music. How does that world mix with your involvement in the theater?« I can’t help but add, »Do we get to hear you sing?«

He laughs, »Perhaps. When I do something, it always has a revue quality. The show is in me!«, he laughs again, »The linear theater piece doesn’t interest me, I always want a panorama, without a fourth wall.«

»I have one more question. Do you want the audience to leave the theatre considering something in particular about West Berlin?«

He takes off his glasses, »Definitely. The audience should not simply grow nostalgic. Already in certain scenes, there is a spirit one feels is not just anecdotal. There is the feeling that we are able to retrieve something from the period – that spirit from the 70s for example – that it is not obscure or only worth remarking on. Instead, we will start asking ourselves: what exactly has changed in the system? The ›extras‹, and the music, will help us do that.«