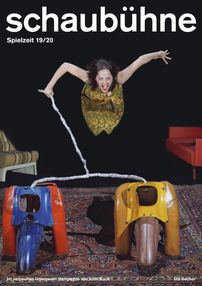 For the 2019/20 season campaign, the Schaubühne is collaborating with performance artist and filmmaker John Bock who literally turned the ensemble upside down with »Im verbeulten Universum« (»In the Dented Universe«). Bock has staged the ensemble actors floating in dark space amongst an arrangement of typical Bock objects, props and storeroom finds. Here you can watch a making-of video.

John Bock creates his own microcosm in which everything seems to dissolve and, at the same time, anything is possible. The laws of gravity are no longer relevant, the actors explore the scenery suspended in mid-air. The resulting images captured by theatre photographer Thomas Aurin present a snapshot of the installation.

Born in Gribbohm, Germany in 1965, John Bock lives and works in Berlin. His action art has featured at events and venues including the documenta in Kassel, the Venice Biennale and the Museum of Modern Art in New York. In 2010, he curated the highly regarded group exhibition »FischGrätenMelkStand« at the Temporäre Kunsthalle on Berlin’s Schlossplatz. In 2017, his solo exhibition »Im Moloch der Wesenspräsenz« featured at the Berlinische Galerie and included a performance involving Lars Eidinger. In June 2019, »Im AntliTZ des SchädelapparaTZ« is being shown at the Neuer Berliner Kunstverein while »LiquiditätsAuraAroma « opens at the Kunsthalle Mannheim in October 2019.