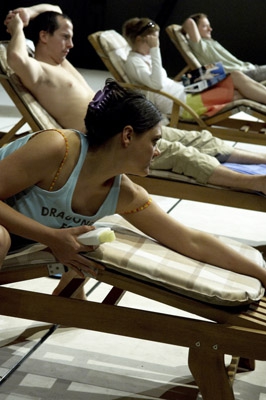 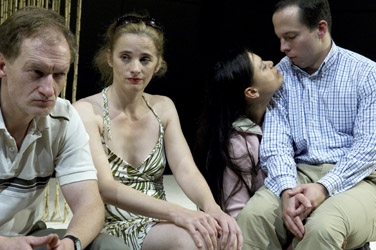 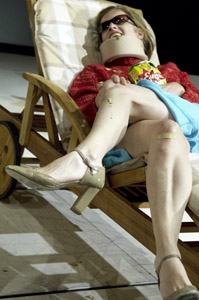 An idyllic Swedish summer on the coast, two couples together on holiday: the mood is friendly, but a bit tense. All is not well in Kristoffer and Hanna’s marriage. Kristoffer keeps on telling Hanna how fat she has become and that she once more, as usual, took far too many clothes – all in front of their friends. And the younger couple, Tomas and Eva Lena, don’t live in harmony and closeness either. There is Tomas who isn’t quite sure if it is really psychology Eva Lena is studying; little things like a forgotten camera can make him go berserk. And there is Eva Lena who shows him quite frankly how much more masculine she thinks the dominant Kirstoffer is. Tomas und Kristoffer are work colleagues at the Stockholm police and have known each other since their time as soldiers in the Bosnian war. Both of them have also brought their service weapons. Are these two couples really only spending their holidays in an innocent holiday resort at the seaside?

LARS NORÉN, born in 1944, is Sweden’s most important contemporary playwright. In 2000, Thomas Ostermeier directed the German premiere of Norén’s »Personenkreis 3.1« at the Schaubühne.

ENRICO STOLZENBURG, born in 1973, directed the productions »Adult Entertainment« and »The End of Civilization « by George F. Walker at the Schaubühne in 2003. He also worked for the Deutsches Nationaltheater, Weimar and the Stadttheater, Bern.