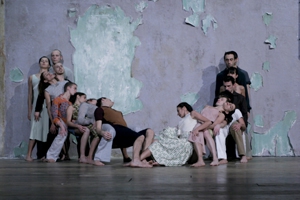 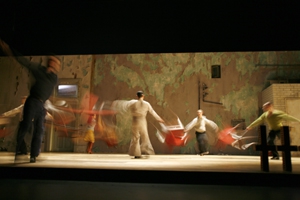 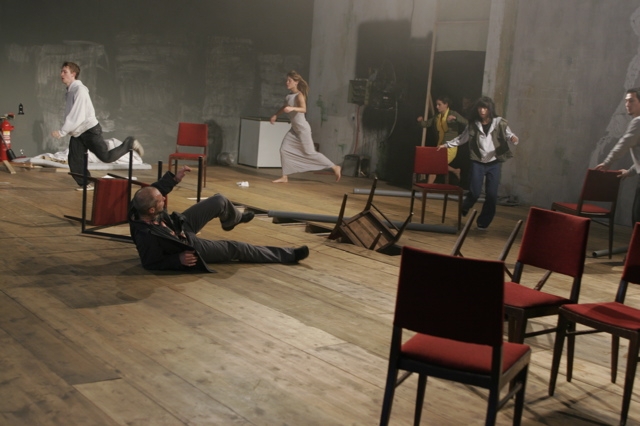 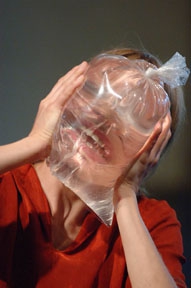 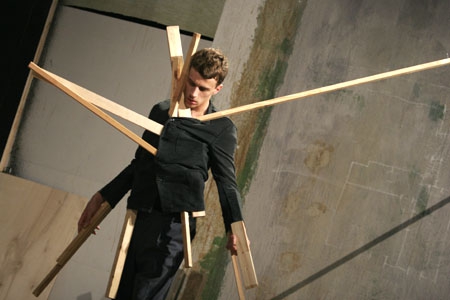 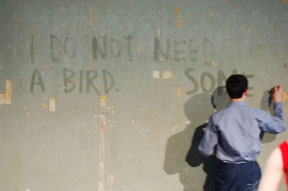 
A Production of Schaubühne am Lehniner Platz in cooperation with Sasha Waltz & Guests.
World Premiere

Founding her company sasha waltz & guests, Sasha Waltz has used the time to reorient herself both organisationally and artistically. The current company unites seven dancers who have been working with her for a long time and seven new dancers. With her latest production Sasha Waltz now builds a bridge from her early Travelogue Trilogy (1993–95), where banal things like furniture, clothes and crocks mutated to living partners of the dancers and gestures of day-to-day life were reduced to their absurdity, and her more abstract productions of the trilogy of the body – consisting of »Körper« (i.e. Bodies), »S« und »noBody« (2000–02) – to the deepening of both components, representation and abstraction, equally. Together with stage designer Thomas Schenk she has designed a space in which traces and rejections of the past remain engraved. This space is facing constant changes. In this state of permanent transformation everything is in a flux. Waltz concentrates on these transformations, which life is permanently undergoing. Special focus is on crisis situations disturbing the natural rhythm. What is left after collapse and devastation? How do we redesign our world after the fall? What is it worth to be saved? A production about deformations and deconstructions. A production about the processual, the flow of life, on possession and the loss of it, on the phenomenon of disappearance.

»I want to link the dancers with objects that are removed from their original function and established in a new context. By doing so, we generate combinations that don’t follow any understandable logic but make human sculptures appear completely unrealistic and surreal. This holds true for both the space and the objects in it. By losing their faces and coming in »masks«, people are deprived of their subjective individuality. Borders between human being and object merge right before our eyes.« Sasha Waltz