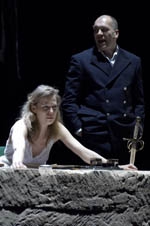 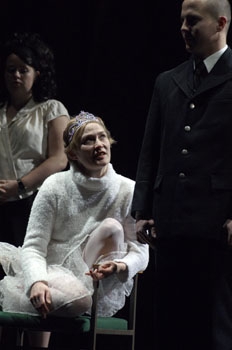 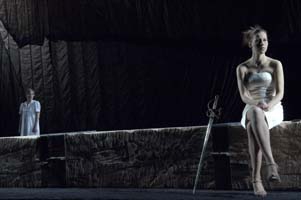 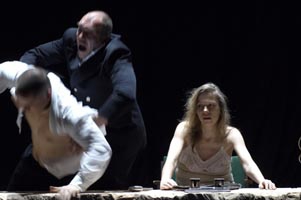 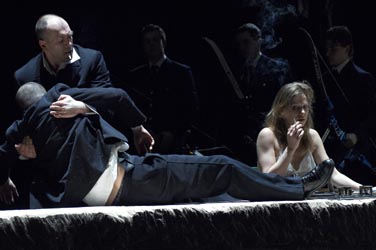 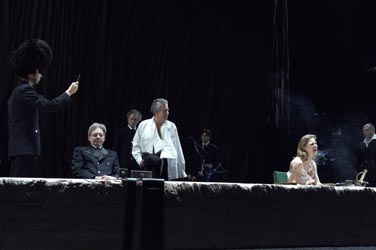 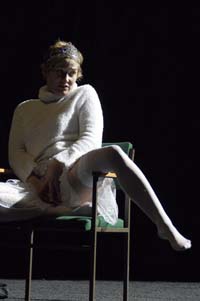 Mary Stuart, Queen of Scots, is sitting in her prison awaiting death. Her beautiful clothes, her jewellery and mirror have been taken away from her and all that is left her are the bible, a crucifix and some sheets of paper on which she writes desperate letters to Elisabeth, Queen of England. She supported an attempt on the Queen’s life – at least, that is what they say. Mary is a threat to Elisabeth because she claims the throne of England. Although Mary was chased away from her Scottish throne because she had been involved in the murder of her husband, she has a large number of supporters – even in England. Elisabeth is terrified: of Mary’s power and intrigues, but also of her own people’s anger she would have to face, if she carried out the death sentence. In order to get rid of the threat and, at the same time, to keep her reputation, Elisabeth instructs the gaoler’s nephew Mortimer to secretly murder Mary. But Mortimer has just returned from France, Mary’s home country, where he has secretly become a Catholic and admirer of Mary’s. Leicester, after wooing Elisabeth long but fruitlessly, is now hoping to find power and love with Mary and thus supports Mortimer’s attempt to save Mary from death. Leicester engineers a meeting between the two Queens in which Mary must fight for her life…
Written by Schiller in 1799, the tragedy shows a 16th century encounter of two women and two worlds – one being Catholic, emotional and sexy, the other being Protestant, virginal and rational. Yet although Mary and Elisabeth are the complete opposite of each other, they are facing the same problems: the clash of their political public and private life, the apparent incompatibility of law and ethics, and the conflict between fate and freedom. In the end, Mary, the murderess, dies for a crime that she didn’t commit. With her death she not only becomes the »beautiful soul« but also makes Elisabeth a murderess herself. »Mary Stuart« shows a controversy of polarities, a struggle for power of two conflicting women who are both culprit and victim, winner and loser.

LUK PERCEVAL was the artistic director of the Het Toneelhuis founded by him in Antwerp between 1998 and 2005. At the Schaubühne Luk Perceval was responsible for the world premiere of productions of Marius von Mayenburg’s plays »The Cold Child« and »Turista« as well as for an adaptation of Jean Racine’s »Andromache« (Friedrich Luft award 2003). In that season he became resident director at the Schaubühne. At Salzburger Festival Luk Perceval directed the Shakespeare marathon »Battles!«, which was invited to the Theatertreffen Berlin in 2000. His works also include Chekhov’s »The Cherry Orchard« at schauspielhannover, Jon Fosse’s »Autumn Dream« (Theatertreffen Berlin 2002) and the Feridun Zaimoglu adaptation of Shakespeare’s »Othello« at the Münchner Kammerspiele. The Schaubühne also saw guest performances of his productions »Aars!«, an adaptation of the »Oresteia« by Luk Perceval and Peter Verhelst, »L. King of Pain«, an adaptation of Shakespeare’s »King Lear«, and »Death of a Salesman« by Arthur Miller.