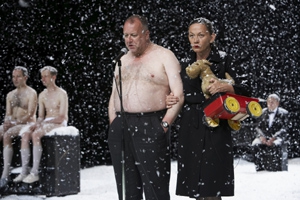 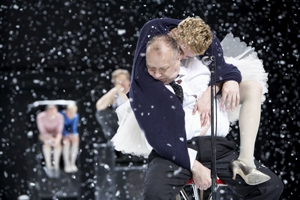 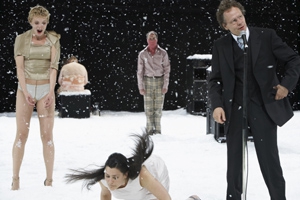 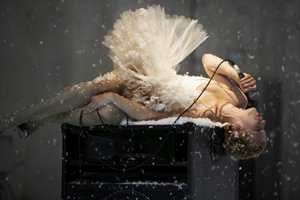 one man, one life, one love

Alceste, a man of principles, dreams and ideals, hates lies and flattery. A man who breaks down in the face of his own excessive, unfulfilled moral demands for the world, and finally flees from the city in disgust.

Don Juan, a worldly-wise man who lives in the countryside, who has taken leave of society, full of disregard for its conventions. An amoral seducer who uses women without scruples, and who feigns regret and even a religious re-awakening to save his skin.

Tartuffe, just as lascivious, has in fact perfected religious hypocrisy. He throws himself into the heart of the bourgeois society he despises in order to exploit its vanity, and to earn a fortune doing so.

Harpagon, a citizen already at the end of his dream rainbow of wealth, who is only made happy by money, is indifferent to suffocating his feisty children with his pettiness.

Alceste, Don Juan, Tartuffe and Harpagon: eternal outsiders with an ambivalent relationship to society, which they alternately despise, flee, seek out and exploit. Feridun Zaimoglu, Günther Senkel and Luk Perceval have written an adaptation on these four great character comedies, in which the various protagonists are fused into one person and the four pieces are condensed into chapters of his life. Luk Perceval directs this journey from idealism to cynicism and egotism, with Thomas Thieme in the lead role.

Feridun Zaimoglu, born in 1964 in Turkey, lives as an author and screenwriter in Kiel. His books include Kanak Sprak, Koppstoff, Abschaum and Leyla. In 2002 he was awarded the Friedrich Hebbel Prize. Günther Senkel, born in 1958, lives in Kiel and has worked since 1997 as a freelance writer. Together with Feridun Zaimoglu he wrote adaptations of Shakespeare’s »Othello» and Wedekind’s »Lulu«, in productions by Luk Perceval at the Munich Kammerspiele.